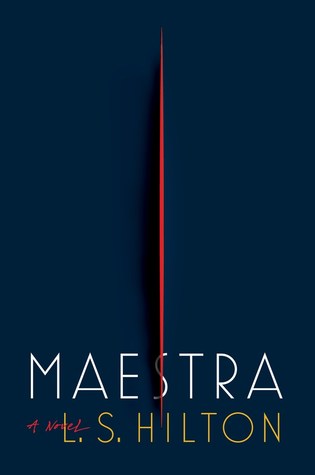 Every year I struggle to find “the” perfect beach book. For me, this is a very important emotional decision. I find that during the height of summer heat my attention wanes and I only want to swim and not read. As such, the beach book becomes the fun read of the year, a time when I can be playful more than serious. I do not want the book to be too fluffy nor too deep. It needs to hit the perfect storm for me; a blend of compulsive readability, can’t-unsee-situations, and provocative characterization. By nature, I am typically a Fantasy and Science Fiction reader, flowing through the age genres and settling more firmly into YA the last several years. For the past year or so I have been challenging myself to read outside of my wheelhouse, to grant myself some leeway into reading other genres, other ages, other things.

However, there are some books I would never lug to the beach. For example, I once saw a woman in a bathing suit reading Ayn Rand’s The Fountainhead while trying to perfect her tan. Later, another beach-goer was reading Immanuel Kant’s philosophy and looking very content with himself. More power to them…if they were “really” reading the books on the beach and not just “being seen” reading these intellectual powerhouses. I personally don’t believe it’s possible to enjoy either of those titles on the beach but, hey, good for them. I could not do it, nor would I ever dream of attempting such a chore. I feel like I would end up flinging both of those titles into the water.

In past years, I have found that I fall into two “types” of books for a beach-read. The first is a super fluffy romance that I can pick up and put down without losing track of anything (hey, I am only human, after all). The second is a race-along epic thriller that chills and provokes in tandem (because, page-turner). I am not usually inclined to either of these sub-genres but, as I have said, the beach book is “different”, “special”, and a unique reading experience for the entire year. My standards (and brain matter) change under the baking sun and, well, I can’t fight that. I refuse to, in fact.

Earlier this year, I back-burnered a book that came out in April, figuring that it might be the perfect summer read for me to take to the beach. Having gone on vacation in the last week where I spent several consecutive days with my bum in the sand, I took the book with me to see if it was, indeed, the ideal beach book. Having just finished it after three solid beach days, and little sleep asides, I can vouch that it is the perfect book for this kind of adventure.

Now, I like to swim whenever I go to the beach. In fact, I tend to ignore whatever book I have brought (regardless of its appeal) to spend as much time in-water as possible. However, on this trip and for the first time ever, I did not actually swim that much, proportionally speaking. I spent a lot of my time lounging on my towel with my toes in the sand reading this incredible book. Frankly, I spent as much time as possible over the three beach days catching snatches of time to pore over this book. In the simplest terms, I could not put it down. It defines the pace for a page-tuner, the compulsive non-stop desire to read. I feel like the word un-put-down-able (which I generally loathe on principle) was coined with this book in mind.

“And what book did you take, pray tell?” I can almost here you asking. Im'ma getting there!

The book is Maestra by L.S. Hilton.

Maestra fits into the secondary book class that I detailed earlier. It is a high-speed thriller that follows a woman narrator, Judith Rashleigh, as she flees the death of a man she was on vacation with. What ensues is a flight across Europe where the main character is hiding in and out of powerful relationships with filthy rich men while remaining off-grid. Hilton outlines the opulence and grandiose of the French Riviera, the beauteous classical Italian cities, and the glistening slick of Paris’s nightlife culture. She also nails the devious nature of a black widow anti-heroine with precision and creativity.

And Judith is such a vile creation – a contemptible human being, really. With this in mind, she also makes the book that much more interesting. She is smart and fearless and ruthless and sexy as all get-out. She takes lovers with abandon and is willing to milk them for all they’re worth. She knows what she wants and she doggedly goes after those goals with a no-holds-barred attitude. She is ambitious, calculating, and fearlessly vindictive. She constantly plays a game of strategy, remaining several steps of her opponents, the reader, and even herself. She outdoes the notion of any old expected, standard literary predator. Frankly, she embodies it, makes it her own, chews the sinews and spits out the expected stereotypes with a challenging smile on her face. She really is that good.

Now, I could go on endlessly about the other things I loved about this book. I could ramble about the high-priced art world and the underlying theft and corruption within, the underpinnings of wealth and decadence, the darkly erotic pleasure domes (read as very graphic sex scenes every thirty pages or so), the crazed sociopathy of a vicious and crafty narrator…but I don’t need to. I will simply end this review with this one statement – I haven’t finished a book this quickly in months, but I read through Maestra in three days flat, hit the end, and debated turning it over and restarting the book. I still may in fact. The jury is still out on that decision and I do have another trip of sun and surf in my near future and what am I to do without another perfect beach book to take along now? The horror, the absolute horror.

To conclude, it’s mid-July and we in Michigan still have six usable weeks of beach-going ahead of us. I encourage you during those times to pick up a copy of Maestra and take it with you. You will not be disappointed. I surely was not...unless you really love to swim, that is. That was mildly diasspointing, but only just so.

Maestra = 5 out of 5 stars. And I really do want more of this character and her exploits.

- for more of Krys's reviews, and a longer detail of Maestra, please visit her personal book blog at http://bibliopunkkreads.com/ .