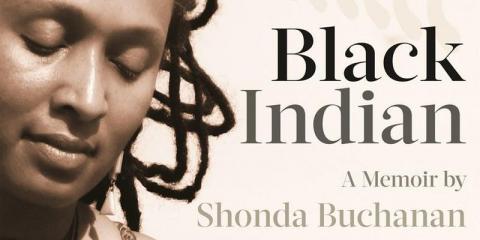 Join us for an afternoon reading with author Shonda Buchanan, as she returns to her hometown to share from her new memoir, BLACK INDIAN.

Buchanan was raised as a Black woman, who grew up hearing cherished stories of her multi-racial heritage, while simultaneously suffering from everything she (and the rest of her family) didn’t know. Tracing the arduous migration of Mixed Bloods, or Free People of Color, from the Southeast to the Midwest, Buchanan tells the story of her Michigan tribe—a comedic yet manically depressed family of fierce women, who were everything from caretakers and cornbread makers to poets and witches, and men who were either ignored, protected, imprisoned, or maimed—and how their lives collided over love, failure, fights, and prayer despite a stacked deck of challenges, including addiction and abuse. Ultimately, Buchanan’s nomadic people endured a collective identity crisis after years of constantly straddling two, then three, races. The physical, spiritual, and emotional displacement of American Indians who met and married Mixed or Black slaves and indentured servants at America’s early crossroads is where this powerful journey begins.

Award-winning poet and educator Shonda Buchanan (1968) was born in Kalamazoo, Michigan, a daughter of Mixed Bloods, tri-racial and tri-ethnic African American, American Indian and European-descendant families who migrated from North Carolina and Virginia in the mid-1700 to 1800s to Southwestern Michigan. Black Indian, her memoir, begins the saga of these migration stories of Free People of Color communities exploring identity, ethnicity, landscape and loss.

Her first book of poetry, Who's Afraid of Black Indians?, was nominated for the Black Caucus of the American Library Association and the Library of Virginia Book Awards. Literary Editor of Harriet Tubman Press, her second collection of poetry, Equipoise: Poems from Goddess Country was published by San Francisco Bay Press. Shonda's poetry and essays have been featured in numerous anthologies. Freelance writer for the LA Weekly since 1991, and Indian Country Today, the Los Angeles Times and the Writer's Chronicle, Shonda is completing a novel and a collection of poetry about the iconic singer, concert pianist and Civil Rights activist, Nina Simone.