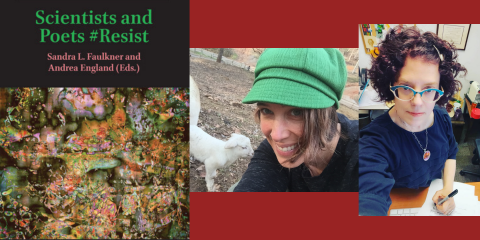 Join us for an evening of personal testimonies about resistance.

Scientists and Poets #Resist is a collection of creative nonfiction, personal narrative, and poetry. This volume is a conversation between poets and scientists and a dialogue between art and science. The authors are poets, scientists, and poet-scientists who use the seven words--"vulnerable," "entitlement," "diversity," "transgender," "fetus," "evidence-based" and "science-based"--banned by the Trump administration in official Health and Human Service documents in December 2017 in their contributions. The contributors use the seven words to discuss their work, reactions to their work, and the creative environment in which they work. The resulting collection is an act of resistance, a political commentary, a conversation between scientists and poets, and a dialogue of collective voices using banned words as a rallying cry-- Scientists and Poets #Resist--a warning that censorship is an issue connecting us all, an issue requiring a collective aesthetic response.

Sandra L. Faulkner, Ph.D. (1999), The Pennsylvania State University, is Professor of Communication at Bowling State University. She has authored or co-authored over 70 books, articles, and chapters, including Poetic Inquiry: Craft, Method, and Practice.

Andrea England, Ph.D., Western Michigan University, is Adjunct Professor of English at that university. Her work has appeared in Midwestern Gothic, Sonora Review, and elsewhere, including the chapbooks Other Geographies and Inventory of a Field.