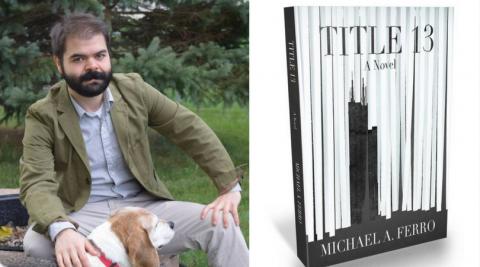 Join us as we celebrate the release of Michael Ferro's debut novel, TITLE 13.

A timely investigation into the heart of a despotic faction within the government, TITLE 13 deftly blends satirical comedy aimed at the hot-button issues of modern culture with the gut-wrenching reality of an intensely personal descent into addiction.

Ferro was awarded an Honorable Mention for Glimmer Train's Short Story Award for New Writers, won the Jim Cash Creative Writing Award for Fiction, and nominated for the Pushcart Prize. Michael's work has been published in print and online at Crack the Spine, Entropy Magazine, Amsterdam Quarterly, Yale University’s The Perch, Duende, The Nottingham Review, IBPA's Independent Magazine, Splitsider,​ Chicago Literati, Random Sample Review, Weekly Humorist, The Bombay Review, The Corvus Review, Jersey Devil Press, The Avalon Literary Review, Potluck Magazine, Robot Butt, Points in Case, Linden Avenue Literary Journal, and elsewhere. He has published selected articles with groups and companies in Chicago, Detroit, Ann Arbor, and elsewhere throughout the country, including humor and satire pieces. Michael is also a Sportswriter and a Features Writer for CBS and CBS Detroit, and a national music and sports columnist with AXS.