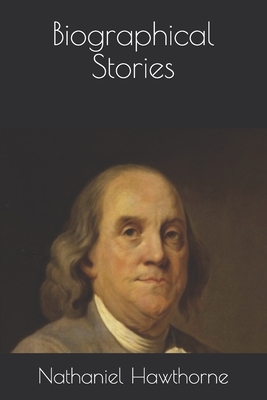 By Nathaniel Hawthorne
$15.99
Available at Warehouse

Biographical Stories for Children is a collection short biographical tales of historical figures including Queen Christina, Benjamin Franklin, Oliver Cromwell, Samuel Johnson, Sir Isaac Newton and Benjamin West. Nathaniel Hawthorne (1804 - 1864) was an American novelist and short story writer. Hawthorne's works belong to romanticism or, more specifically, dark romanticism, cautionary tales that suggest that guilt, sin, and evil are the most inherent natural qualities of humanity. Many of his works are inspired by Puritan New England, combining historical romance loaded with symbolism and deep psychological themes, bordering on surrealism. His depictions of the past are a version of historical fiction used only as a vehicle to express common themes of ancestral sin, guilt and retribution. His later writings also reflect his negative view of the Transcendentalism movement. Hawthorne was predominantly a short story writer in his early career. Upon publishing Twice-Told Tales, however, he noted, "I do not think much of them," and he expected little response from the public. His four major romances were written between 1850 and 1860: The Scarlet Letter (1850), The House of the Seven Gables (1851), The Blithedale Romance (1852) and The Marble Faun (1860). Another novel-length romance, Fanshawe was published anonymously in 1828. Hawthorne defined a romance as being radically different from a novel by not being concerned with the possible or probable course of ordinary experience. In the preface to The House of the Seven Gables, Hawthorne describes his romance-writing as using "atmospherical medium as to bring out or mellow the lights and deepen and enrich the shadows of the picture".