Home is Not Here (Hardcover) 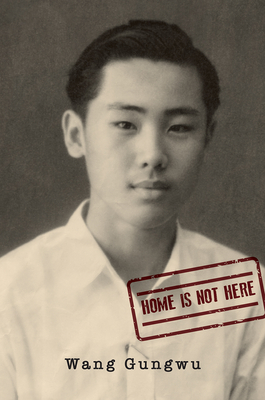 As someone who has studied history for much of my life, I have found the past fascinating. But it has always been some grand and even intimidating universe that I wanted to unpick and explain to myself.
Wang Gungwu is one of Asia’s most important public intellectuals. He is best-known for his explorations of Chinese history in the long view, and for his writings on the Chinese diaspora.  With Home is Not Here, the historian of grand themes turns to a single life history: his own.
Wang writes about his multicultural upbringing and life under British rule. He was born in Surabaya, Java, but his parents’ orientation was always to China. Wang grew up in the plural, multi-ethnic town of Ipoh, Malaya (now Malaysia). He learned English in colonial schools and was taught the Confucian classics at home. After the end of WWII and Japanese occupation, he left for the National Central University in Nanjing to study alongside some of the finest of his generation of Chinese undergraduates. The victory of Mao Zedong’s Communist Party interrupted his education, and he ends this volume with his return to Malaya.
Wise and moving, this is a fascinating reflection on family, identity, and belonging, and on the ability of the individual to find a place amid the historical currents that have shaped Asia and the world.

“Generalities die by a thousand particular cuts. History, fortunately, is the domain of the particular. A new memoir by historian Wang Gungwu, Home Is Not Here, has given us one beautiful, incisive cut against any general idea of Chinese belonging.”
— China Channel

“Wang’s continual balancing of his Chinese heritage with his growing up in a multicultural, British-ruled Malaysia encapsulates the challenge of dual or multiple identities that many overseas Chinese face.”
— Asian Review of Books

“If home was not ‘here,’ nor was it in China, it was also not nowhere. Faced with the unknowability of his own home, history and roots, he learned to take refuge in the world. There, through geography, literature and eventually history itself, he arrived at a capacious world-mindedness in which ‘all places and people had become knowable.’ For Wang, home became, in that sense, everywhere.”
— Mekong Review

“His stories of growing up in colonial Malaya are illuminating: mingling with people of different races and Chinese people of different dialect groups enabled him even at a young age to develop empathy with strangers and nurtured a sense of inclusiveness, even of humanity. Like a sponge, he soaked up all that he could learn. His intellectual curiosity was boundless and his heart was open to diversity.”
— Journal of the Royal Asiatic Society

“For such an outstandingly accomplished individual, publication of such an evocative and detailed memoir carries tremendous weight in the burgeoning field of Chinese overseas studies.”
— Cross-Currents

“This book is an intimate reflection on the themes of family, education, language, Chinese identity, and the search for a sense of home during a tumultuous period in Southeast Asian and Chinese history.”
— New Books Network

"A charming, intimate, and modest autobiography of the childhood and schooling of a great historian of China. . . . How a wise Chinese mother and a headmaster in Ipoh Malaysia taught their only son to love learning in and out of China in transition."
— Ezra Vogel, Harvard University

“As the doyen of Chinese studies and the Chinese in Southeast Asia pens the memoirs of his early days in Malaya and China, history comes to life in a most intimate way. What could lead to a rootless confusion becomes a capacious cosmopolitanism.”
— Prasenjit Duara, Duke University