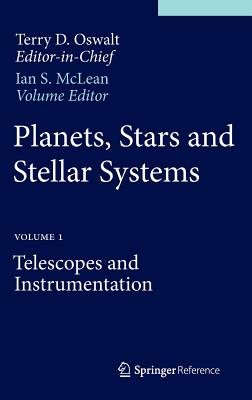 All chapters of the handbook were written by practicing professionals. They include sufficient background material and references to the current literature to allow readers to learn enough about a specialty within astronomy, astrophysics and cosmology to get started on their own practical research projects. In the spirit of the series Stars and Stellar Systems published by Chicago University Press in the 1960s and 1970s, each chapter of Planets, Stars and Stellar Systems can stand on its own as a fundamental review of its respective sub-discipline, and each volume can be used as a textbook or recommended reference work for advanced undergraduate or postgraduate courses. Advanced students and professional astronomers in their roles as both lecturers and researchers will welcome Planets, Stars and Stellar Systems as a comprehensive and pedagogical reference work on astronomy, astrophysics and cosmology.

Dr. Terry D. Oswalt, an astronomer, is Head of the Department of Physics and Space Sciences and Associate Provost for Research at Florida Institute of Technology. He has also served the U.S. National Science Foundation as program officer for Stellar Astronomy and Astrophysics. He earned his Ph.D. in Astronomy at The Ohio State University specializing in photoelectric and spectroscopic studies of binary star systems, late stages of stellar evolution, minor planets, and comets. Since coming to Florida Tech in 1982, Dr. Oswalt has taught astronomy and physics, while continuing his primary research interest in studies of collapsed stars called white dwarfs. Because such objects are very faint, this work often takes him to Kitt Peak National Observatory in Arizona, Cerro Tololo Inter-American Observatory in Chile, and Mauna Kea Observatory in Hawaii, where telescopes as large as 10-meters are available on a competitive basis to scientists. Oswalt is the founding Chairman of the Southeast Association for Research in Astronomy, a consortium of 10 universities which operates an automated 1-meter telescope at Kitt Peak National Observatory near Tucson, Arizona. In 2007 SARA will assume operations of a similar telescope at Cerro Tololo Interamerican Observatory in Chile. Oswalt also has been director of the SARA summer internship program, which brings undergraduate students from around the U.S. to the SARA facility at Kitt Peak each summer to do research in astronomy. Dr. Oswalt has written over 100 scientific articles and edits the I.A.P.P.P. Communications, an international journal for advanced amateurs, students, teachers and professionals who collaborate on research and educational projects in astronomy. He is also the editor for a three-volume set of Springer books, "The Future of Small Telescopes in the New Millennium".Dr. McLean has been a member of the faculty at UCLA and Director of the UCLA Infrared Laboratory for Astrophysics since 1989. He has served as Vice Chair for Astronomy since 2009. The IR Lab at UCLA is well-known for the development of many astronomical instruments for the Keck Observatory and other telescopes. Dr. McLean is one of the world's leading authorities on the application of electronic imaging systems to advanced astronomical instrumentation. He has written over 300 articles and his current book, "Electronic Imaging in Astronomy: detectors and instrumentation," published by Springer is in its second edition. Dr. McLean received his BSc(Hons) in Physics & Astronomy and his PhD in Astronomy from Glasgow University (UK) in 1971 and 1974 respectively. While a member of staff at the Royal Observatory Edinburgh from 1979-1989 he developed the first CCD-based imaging spectro-polarimeter and the first facility-class camera for the 3.8-m UK Infrared Telescope to use infrared arrays. Since joining UCLA, his lab has delivered or assisted in all of the currently operational infrared instruments at the W. M. Keck Observatory. Dr. McLean was the principal investigator for the NIRSPEC and MOSFIRE instruments at Keck, the twin-channel infrared camera at Lick Observatory and the FLITECAM instrument for NASA's Stratospheric Observatory for Infrared Astronomy. He served on the Science Steering Committee for the W. M. Keck Observatory for ten years and he is an Associate Director of the University of California Observatories. Dr. McLean is a former president of IAU Commission 25 (Photometry and Polarimetry) and a former president of IAU Commission 9 (Instrumentation and Techniques). He is a member of the American Astronomical Society (AAS) and the Society of Professional Instrument Engineers (SPIE). His research interests are broad. From his early career he is known for many discoveries involving the intrinsic polarization of starlight. Currently, his main research involves the study of sub-stellar mass objects (brown dwarfs), star forming regions, the galactic center, and star-formation in high-redshift galaxies. His web site bdssarchive.org provides a public data base of infrared spectra for low-mass stars and brown dwarfs.