BALOCHISTAN In the Crosshairs of History (Hardcover) 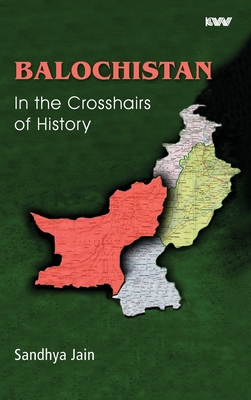 Pakistan's growing proximity to a China-led new geopolitical order and a Turkey-led potential 'caliphate' pose new challenges to India and the world. The China-Pakistan Economic Corridor traverses territory that legally belongs to India, and enables China to expand its footprint on land and sea routes to Europe, the Middle East, up to Africa and even South America. These developments highlight the strategic importance of Balochistan, which stands at the crossroads of Afghanistan, Iran and the Gulf.

This work discusses Balochistan's failure to secure independence in August 1947, including the Anglo-US quest for military bases and post-1945 dominance. It traces the distinct identity of the Balochs that forms the basis of Baloch nationalism, along with successive insurgencies since 1948, their brutal suppression, and the emergence of powerful guerrilla groups. The China-Pakistan Economic Corridor straddles the Silk Road Economic Belt and Maritime Silk Road and gives China command of a geostrategic sphere from Xinjiang to the Mediterranean Sea and beyond, making it a two-ocean power, while swamping Islamabad in untold debt. Finally, China's vision for a new international order via the Border and Road Initiative contrasts with India's gentler neighbourhood policy; it has triggered the evolution of the Indo-Pacific concept from a purely maritime idea to a geopolitical one. India is adamant that Beijing should not achieve a Sino-centric unipolar Asia, as a multipolar Asia is a critical pillar of a multipolar world.

Balochistan is strategically located at the crossroads of Afghanistan, Iran and the Gulf, at the mouth of the Strait of Hormuz, through which the bulk of Asia's supply of oil passes. To control the Gulf region and secure their military bases in northwestern India, London tried to make Balochistan accede to Pakistan prior to Partition, and encouraged Mohammad Ali Jinnah to annex the territory. Ahmad Yar Khan, the Khan of Kalat, struggled in vain to regain the independence he was entitled to under the 1876 treaty with the British Crown.