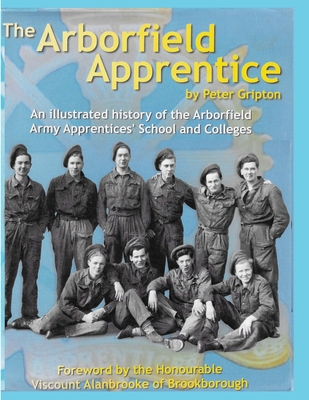 This is an illustrated definitive history of Army Apprentice training at Arborfield throughout the 20th Century. Peter Gripton has firstly done a service to all Arborfield Apprentices and staff members; secondly he has done a service to clarity out of obscurity (clario ex obscurio). Of the latter, because of the diversity of sources, his seamless historical narrative is a singular success; of the former, he certainly deserves the accolades of the many Old Boys who will welcome this rendering of their story.

With relevance to both of these sentiments, Peter's light and readable style gives all the appearance that he enjoyed writing this history. But, bearing in mind the dictum, that which is written without pain will be read without pleasure' - there is ample evidence that Peter took great pains to ensure that his readers will enjoy his book.

Many of his readers will have actually made the history that he has so faithfully recorded. The American writer, John Gardner, commented that, history never looks like history when you are living through it; it always looks messy and confusing and always feels uncomfortable'. Most Old Boys may claim that they lived through the most messy, confusing and uncomfortable of times. The author has been punctilious in awarding an equal balance to each period of time.

In conclusion, a debt of gratitude is due to the Commandants who encouraged this undertaking, notably to Colonel Peter Gibson, and to lecturer Bryn Richards, who collected many of the facts in his earlier 'Brief History'. Enduring gratitude goes to 'Old Boy' Rodney Smith, who helped finance the writing of this book - without his interest in the project, it is likely that the labours of all would have been in vain.

The Army Apprentice system has been an outstanding success from its foundation. It is excellent that this chapter of a great tradition has now been recorded for posterity.