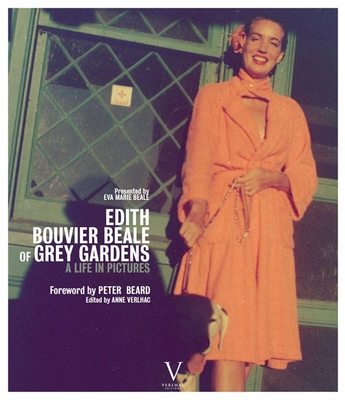 Edith "Little Edie" Bouvier Beale (1917-2002) is best known for her appearance in the critically acclaimed 1975 film Grey Gardens, a documentary by Albert and David Maysles that explored the reclusive lives of Beale and her mother "Big Edie," the first cousin and aunt of Jacqueline Kennedy Onassis, respectfully. Over the past three decades, the film and its eccentric stars have become cult icons, inspiring fashion tributes by the likes of Phillip Lim and John Galliano, a hit Broadway musical adaptation that swept up three Tony Awards in 2007, and an upcoming HBO movie starring Drew Barrymore and Jessica Lange as the famed odd couple.

Edith Bouvier Beale of Grey Gardens: A Life in Pictures, the latest installment in a series that includes photo-biographies of John F. Kennedy, Pope John Paul II, Grace Kelly, Marilyn Monroe, and others, presents the most in-depth look at the life of Little Edie since the Maysles' film vaulted her into the public consciousness. Conceived by members of the Beale family, the book traces a line from Edie's childhood through her heady days as a young socialite and her later years at Grey Gardens, the decrepit East Hampton estate where she and her mother lived in near-total isolation for decades. Featuring over 150 newly uncovered photographs and letters, Edith Bouvier Beale of Grey Gardens offers unprecedented access to the personal history of this twentieth-century woman of mystery.

Eva Marie Beale, born and raised in New York, met Bouvier Beale at the age of 24. The founder of Grey Gardens Collections, an online store inspired by the life of Edith Bouvier Beale, Eva's passions include photography and collecting antiques. Peter Beard took his first pictures at age twelve, and photography quickly evolved into an extension of his diaries as a way to preserve and remember vacations and favorite things. Trips to Africa in 1955 and 1960 piqued his interests, and after graduating from Yale he returned to Kenya via Karen Blixen. In the early 60s, Beard worked at Kenya's Tsavo National Park, acquired a ranch in East Africa, and made his home base. Peter Beard's first exhibit was in New York in 1975. In addition to creating original artwork, Beard has befriended and collaborated on projects with many artists including Andy Warhol, Truman Capote, and Francis Bacon. In 1996, after he was skewered and trampled by an elephant, his first major retrospective opened at the Centre National de la Photographie in Paris, followed by others around the world. He now lives in New York City, Montauk Point, and Kenya with his wife Nejma and daughter Zara. Anne Verlhac grew up in western Africa and studied literature and acting before becoming a design instructor and branding consultant. A founding member of Verlhac Editions, she lives in Paris with her husband and young daughter.