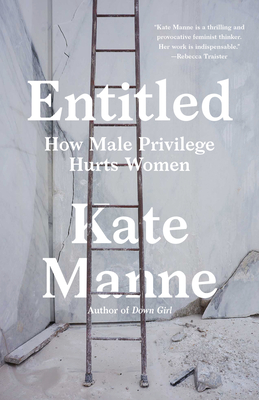 An urgent exploration of men’s entitlement and how it serves to police and punish women, from the acclaimed author of Down Girl

“Kate Manne is a thrilling and provocative feminist thinker. Her work is indispensable.”—Rebecca Traister

In clear, lucid prose, Manne argues that male entitlement can explain a wide array of phenomena, from mansplaining and the undertreatment of women’s pain to mass shootings by incels and the seemingly intractable notion that women are “unelectable.” Moreover, Manne implicates each of us in toxic masculinity: It’s not just a product of a few bad actors; it’s something we all perpetuate, conditioned as we are by the social and cultural mores of our time. The only way to combat it, she says, is to expose the flaws in our default modes of thought while enabling women to take up space, say their piece, and muster resistance to the entitled attitudes of the men around them.

With wit and intellectual fierceness, Manne sheds new light on gender and power and offers a vision of a world in which women are just as entitled as men to our collective care and concern.

Kate Manne is an associate professor of philosophy at Cornell University, where she has taught since 2013. Before that, she did her graduate work at MIT and was a junior fellow in the Harvard Society of Fellows. The author of Down Girl, she has written for The New York Times, The Washington Post, The Atlantic, The Times Literary Supplement, and Politico, among other publications. She was recently named one of the world’s top ten thinkers by Prospect  (UK).

“One of the qualities that makes Manne’s writing bracing and even thrilling to read is her refusal to ingratiate herself by softening the edges of her resolve. . . . She’s like a pathologist wielding a scalpel, methodically dissecting various specimens of muddled argument to reveal the diseased tissue inside.”—The New York Times­

“Manne’s concept of entitlement is versatile and useful; like the theory of gravity, it has equal power in explaining phenomena both big and small.”—The New Yorker

“With perspicacity and clear, jargon-free language, Manne keeps elevating the discussion to show how male privilege isn’t just about securing and hoarding spoils from women, but an entire moral framework.”—The Guardian

“With wincing clarity, Manne explains how a society that organizes itself around the wants and whims of men will radiate that bias into every area of life. . . . Her observations offer that rare brand of insight: the kind so ingenious that it quickly begins to seem obvious.”—The Atlantic

“[A] clear-eyed analysis of misogyny [with] an element of timeliness that translates to something of a gut punch . . . Reading the book is in fact a bit like taking a sweeping tour, a la It’s a Wonderful Life, of one’s history experiencing misogyny, except Manne is a sharper, more astute Clarence. . . . Cathartic.”—Mother Jones

“Entitled is the perfect guide to fight an imperfect world.”—Times Higher Education

“Entitled is not just timely, but timeless—sure to be part of the feminist canon.”—Jessica Valenti, columnist and author of Sex Object: A Memoir

“Entitled is the work of a once-in-a-generation mind, and as always, Manne succeeds in leaving feminism richer and more robust than when she found it.”—Moira Donegan, columnist, The Guardian

“Entitled is electric.”—Darcy Lockman, author of All the Rage

“Kate Manne is among the greatest political philosophers of her generation. Her work is clear, compelling and intellectually devastating . . .”—Laurie Penny, author of Unspeakable Things

“Kate Manne is the Simone de Beauvoir of the 21st century . . . [Her] writing is as breezy as it is sharp and unflinching, and will give any patriarchy-fighter the ammo she needs to keep fighting.”—Amanda Marcotte, author of Troll Nation

“Entitled is a clarion call to undo the intimate ravages of patriarchy. . . .”—Imani Perry, author of Breathe