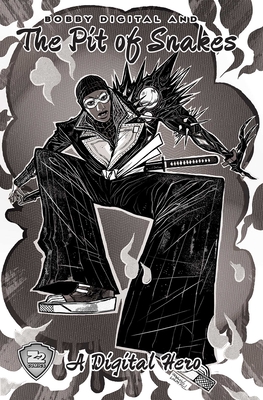 Who are you, what is real? This is the question Bobby Digital is seeking to answer. Embracing his id, ego and superego he embarks on a quest to figure out the nature of his reality and himself.

He will be ambushed by enemies unknown, he will be tried in ways most men can’t endure. Will he be victorious? Most of all will he survive the Pit of Snakes?!

From the mind of the legendary RZA, Bobby Digital and The Pit of Snakes will coincide with the relaunch of the iconic character and be synced to music that will melt your mind.

Wu-Tang Clan mastermind Robert Diggs, best known as the RZA among several other pseudonyms, is one of hip-hop's most revered, influential producers. With the group's classic 1993 debut, Enter the Wu-Tang (36 Chambers), he established their widely imitated core sound, consisting of stark, booming beats and chilling samples (heavily drawing from vintage soul records as well as kung fu movies), setting the backdrop for the crew's gritty, violent narratives.

Following the album's trailblazing success, Diggs participated in the pioneering horrorcore group the Gravediggaz, and produced the first wave of solo releases by his fellow Wu-Tang members. Starting with 1997's Wu-Tang Forever, he concentrated less on producing Wu-Tang releases and devoted more time to his solo career, with the gold-selling debut by his alter ego Bobby Digital arriving in 1998.

He also successfully ventured into film and television work, beginning with his highly acclaimed score for Jim Jarmusch's Ghost Dog: The Way of the Samurai (1999) and continuing with a lengthy string of soundtracks (Kill Bill Volume 1 & 2) and acting roles (American Gangster, Californication, Brick Mansions, The Dead Don’t Die). He made his directorial debut with 2012's The Man with the Iron Fists, and has also directed Love Beats Rhymes (2017) and Cut Throat City (2020). RZA executively produced the Hulu original series Wu-Tang: An American Saga. He’s also written two books: The Wu-Tang Manual (2005) and The Tao Of Wu (2009).