Truth, Lies and ETs: How We Stumbled into the Universe (Paperback) 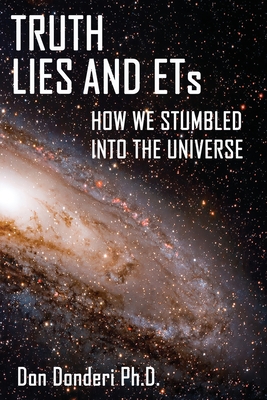 Earth is in the middle of a revolution. It might lead us to more knowledge about ourselves, our place in the universe and the universe itself, or it might lead us to catastrophe. This book is a report on seventy-five years of history during which extraterrestrials (ETs) and their extraterrestrial vehicles (ETVs;, which used to be called UFOs) - have made themselves a part of life on earth. Don Donderi, psychology professor at McGill University in Montreal (retired), tells us in Truth, Lies and ETs: How we Stumbled into the Universe, that Alien visitors have been kidnapping humans and treating us like specimens for at least 75 years. Beginning during the last years of World War 2, visitors from elsewhere in the Universe began arriving in their "flying saucers." They haven't left, and have been observing and experimenting with us ever since. The uninvited extraterrestrial visitors (ETs) kidnap and examine people; interfere with human reproduction to create hybrid human-aliens, and come and go as they please.
While every part of this story has been told before by careful and dedicated researchers, Donderi assembles it all into one easily accessible volume that makes it hard to ignore: what is really happening (Truth), how governments have tried to conceal what is happening (Lies), and who is doing this to us (ETs).
His book is a concise summary of our current uncertain status on the planet that we used to think was ours alone. It brings together facts that, taken one at a time, might easily be dismissed, forgotten or ignored. But when the simultaneous impact of all the facts are considered, one conclusion is inescapable, that we humans are no longer masters of our planet. Extraterrestrials treat us the way we routinely treat earth's lesser species: tracking, capturing, and breeding them and keeping them under surveillance. We have to realize that this is happening before we can act together to regain control of our destiny on earth.
"... his research is so painstaking, his argument so compelling...I would recommend this book to open-minded readers so they can join in what will soon become a major discussion."-Susan Jean Palmer, Affiliate Professor, Department of Religions and Cultures, Concordia University Montreal
"...Spare, cogent, forceful, and direct.'"-Keith Henderson, author of Mont Babel
"Dr. Donderi presents the facts, the reports, and the hard evidence that other research scientists ignore and professional disinformants deny. A highly recommended page turner."- Kathleen Marden, ETV and abduction researcher, on-camera expert and author, with the late Stanton Friedman, of Captured: The Betty and Barney Hill UFO Experience