LGBTQ+ Icons: A Celebration of Historical LGBTQ+ Icons in the Arts (People) (Hardcover) 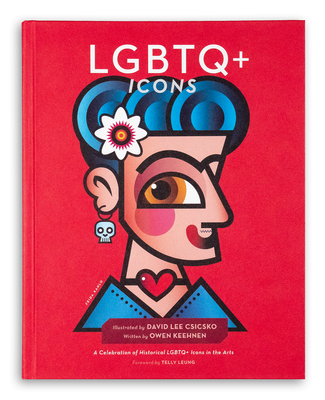 From music to movies, literature to dance - the arts have always been influenced by the work
of LGBTQ people. LGBTQ+ Icons spotlights the history and contributions of 50 pioneering artists who lived and worked around the world.

Bold, whimsical illustrations by David Lee Csicsko (The Skin You Live In) and concise bios from historian Owen Keehnen celebrate a diverse group of artists, from LGBTQ icons James Baldwin, Frida Kahlo, and Freddie Mercury to lesser-known colorful characters like vaudeville performer Ada "Bricktop" Smith, the toast of 1920s Paris café society who opened a queer-friendly club where all were welcomed, and Australian dandy Leigh Bowery, whose unapologetic flamboyance influenced an entire generation of fashion designers.

LGBTQ+ Icons is an entertaining exploration of a part of history most people don't know is even missing. It will inspire readers young and old to be confident in who they are, and to take pride in their own creativity. Produced with premium materials, this book is a must-read for Pride month and a perfect collectible year-round

David Lee Csicsko is an award-winning artist and designer whose distinctive artwork, stained glass, and mosaics beautify train stations, hospitals, churches and universities across the Midwest and East Coast. His many credits include designing the Obamas' White House Christmas in 2012. David's lively illustrations can also be seen in The Skin You Live In from the Chicago Children's Museum, now in its 16th printing. Through his use of color, bold graphics and playful patterns, David Lee Csicsko celebrates the richness and diversity of life. Queer author, activist, and grassroots historian Owen Keehnen has written several fiction and nonfiction books and has been published in dozens of magazines and anthologies worldwide. He is a co-founder of The Legacy Project, a Chicago-based LGBTQ history, arts, and education organization. Owen was inducted into the Chicago LGBT Hall of Fame for his dedication to fostering LGBTQ culture and preserving its past.