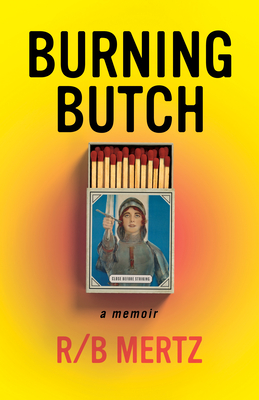 "This blistering memoir is the book I didn't know I needed... I'm so grateful they had the courage to share their experience in such a transparent, authentic way." --One of BuzzFeed's Most Anticipated Books of 2022

When divorce moves young R/B Mertz away from rural Pennsylvania and their abusive father, Mertz's life is torn in two. Mertz's mom and new stepdad dive headfirst into conservative Catholic homeschooling, entrenching themselves in a world dominated by saints, prayers, and having as many babies as possible, just as Mertz is starting to realize they might be queer. Mertz clings to Catholicism as a rebellion against their anti-Catholic bio-dad, and to movies and musicals as beacons of the world outside the conservative closet constructed by the homeschoolers--who might actually be more concerned with being conservative than with being good, while Mertz's bio-dad just wants them to be "normal." Trying to stave off the inevitable, Mertz enrolls in a conservative Catholic college in Ohio. Coming of age in the early aughts, they grapple with flirtations, sexual encounters, and confusing relationships with students and faculty, as they try to figure out how to live a life in a world hell-bent on making them choose between their community and their identity. At turns rebellious, charming, and self-effacing, Mertz struggles to navigate this oppressive environment, questioning whether or not there is a place for them inside or outside of the Catholic Church; whether they can be themselves on the left or the right; whether they can be "conservative" or "liberal;" or whether they can be at all. Ultimately, Burning Butch is the courageous story of a trans / non-binary butch on a quest to survive with their authenticity intact.

R/B Mertz (thee/thou) is a trans / non-binary butch poet and artist. She/they wrote the essay, "How Whiteness Kills God & Sprinkles Crack on the Body," the forward for John J. McNeill's Freedom, Glorious Freedom: The Spiritual Journey for Gays, Lesbians, and Everyone Else, and poems, including (We all end up in) the CAN published by American Journal of Poetry. Mertz taught writing in Pittsburgh for eleven years and was honored to be a finalist for City of Asylum's 2020-21 Emerging Poet Laureate of Pittsburgh. On January 1, 2021, Mertz left the US for love, and they now reside in Toronto, Ontario, traditionally the territory of many nations including the Mississaugas of the Credit, the Anishnabeg, the Chippewa, the Haudenosaunee and the Wendat peoples.