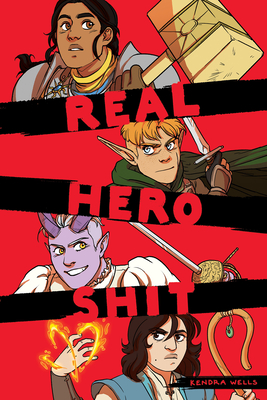 "A fresh, hilarious, and even raunchy spin on the classic questing formula." -- IGN

"Real Hero Shit delivers excitement, depth, and most of all, fun." -- FOREWORD MAGAZINE

Adventure awaits But our heroes are missing some manpower.

People are going missing in a small mountain town. The city guard are blocked from a real investigation. The notorious Underguild has assigned Michel a secret mission: find the missing villagers and bring whatever kidnapped them to justice. Unfortunately for Michel (and his fellow adventurers, Ani and Hocus), they're short a fighter and need one more party member to foil this plot. Even more unfortunately, the only volunteer seems to be the arrogant, ostentatious, purple playboy Prince Eugene looking to cure his boredom. Covert is not a concept that he's familiar with, and let's just say his commitment to the mission is questionable.

Every day is basically spring break for Eugene, but outside the palace walls he crashes into a hard reality: the system that kept him safe in his silk-sheeted bed isn't particularly concerned with the well-being of anyone who isn't him. Eugene will have to level-up his awareness if he means to be a real hero, and time is running short

Kendra Wells is a comic artist and illustrator. Their work includes Tell No Tales: Pirates of the Southern Seas, political cartooning with The Nib, and character design for Dimension 20's The Unsleeping City seasons one and two. They live in Brooklyn with their cat and enjoy food, swords, and video games where you can kiss.