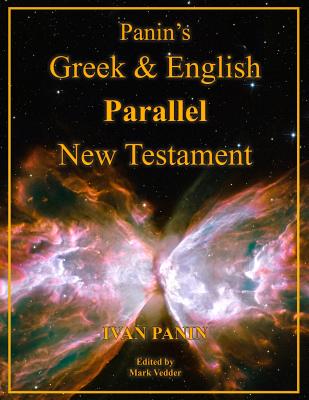 This is Ivan Panin's classic Greek Critical d104 (1934) side-by-side with his English translation (1914, revised 1935, edited for contemporary language 2014) in extra large 16-point type. English is on the left page, Greek is on the right. His full notes are included, as well as all the introductions and studies ever included in previous editions.

The text has been corrected word-for-word, resulting in the single most accurate offering of this man's work put together to date. Both Ivan Panin's Greek critical text and his English translation are of the highest caliber and both rank at the top their respective fields. The Editors have felt that great service would be provided in putting together an edition suitable for scholar and reader alike; comfortable to read and easy to understand.

It is difficult to summarize Panin's work because most know him primarily as the investigator into Numerics. His biography is provided in the Preface, so here suffice it to say that Panin was a literary scholar fully competent to translate the Scriptures and determine textual readings with or without Numerics. The discovery of Numerics and the subsequent willingness to devote a lifetime to the systematic study of it was most fortuitously done by one of perhaps a handful qualified for such an undertaking.

A perusal of his other works will quickly demonstrate that Ivan Panin's keen mind and penchant for leaving no stone unturned, combined with an alarmingly stringent diligence, produced an ideal marriage between overwhelming task and undaunted courage. His Introduction at the beginning as well as his Papers following the text give example after example of how he specifically applied numeric methods to questioned readings. Whether one subscribes to his views or not, he produced two masterpieces in his Greek Critical d104 and English translation; this work presents the full scope of both together.