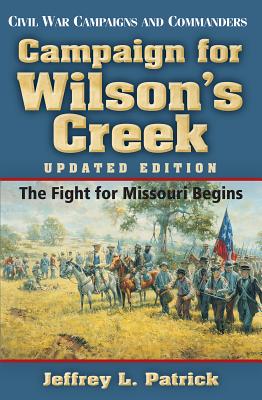 In early 1861, most Missourians hoped they could remain neutral in the upcoming conflict between North and South. In fact, a popularly elected state convention voted in March of that year that “no adequate cause” existed to compel Missouri to leave the Union. Instead, Missourians saw themselves as ideologically centered between the radical notions of abolition and secession.

By summer 1861, however, the situation had deteriorated dramatically. Because of the actions of politicians and soldiers such as Missouri Gov. Claiborne Jackson and Union Gen. Nathaniel Lyon, Missourians found themselves forced to take sides.

In this updated edition, author Jeffrey Patrick tells the fascinating story of high-stakes military gambles, aggressive leadership, and lost opportunities. Campaign for Wilson's Creek is a tale of unique military units, untried but determined commanders, colorful volunteers, and professional soldiers. The first major campaign of the Civil War to take place west of the Mississippi River guaranteed that Missourians would be engaged in a long, cruel civil war within the larger, national struggle.

JEFFREY L. PATRICK is the National Park Service librarian at Wilson's Creek National Battlefield. He is the author of numerous articles on various aspects of American military history, and is the editor/coeditor of two Civil War diaries and a memoir from the  World War I period. He lives in Republic, Missouri.

"Patrick provides an excellent overview of the campaign and battle of Wilson's Creek, the second major Confederate victory of the Civil War. Patrick's extensive research, use of lively quotations, and strong narrative combine for a compelling story." -Wilson Piston

"This manuscript's greatest strength, is the richness of its first-hand accounts and its multitude of quotes by participants themselves." -John C. Waugh

"This is an excellent manuscript to be included in the Campaign & Commanders series." -Steven E. Woodworth