Morgan's Men: The Inside Story of England's Rise from Cricket World Cup Humiliation to Glory (Hardcover) 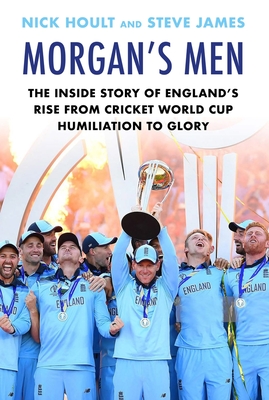 From English cricket's embarrassing failure at the 2015 World Cup to their heart-stopping victory four years later, Nick Hoult and Steve James vividly describe the team's dramatic journey from abject disappointment to finally lifting the trophy. Morgan's Men reveals how the team became the most aggressive limited-overs side in the world, led by their inspirational captain Eoin Morgan, whose vision and determination to succeed captured the imagination of the nation.

Hoult and James follow England's journey from Bangladesh to Barbados, from Melbourne to Manchester, to present the inside story of the team's rebirth. They tell us how players dealt with the Ben Stokes court case, the sacking of Alex Hales for a drugs ban, and reveal the innovative new strategies and tactics that helped them become the best in the world, culminating in a World Cup final that was arguably the greatest one-day match of all time.

Nick Hoult is the chief cricket correspondent for The Telegraph. He is the author of The Daily Telegraph Book of Cricket and ghosted Geoffrey Boycott's book The Corridor of Certainty. He has reported on cricket all over the world and ghosted columns by many leading figures in the game including Michael Vaughan, Shane Warne, Kevin Pietersen and during the 2019 World Cup, Jonny Bairstow. Steve James is a former Glamorgan and England cricketer, who is now a cricket and rugby writer for The Times. This is his tenth book. He has written The Plan and The Art of Centuries, as well as an autobiography. He has ghosted books for Duncan Fletcher and Matt Prior. He lives in Cardiff.