Life After the State: Why We Don't Need Government (Paperback) 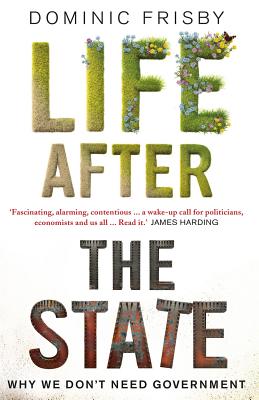 In 2006, the comedian Dominic Frisby began to question the advice his financial advisers were giving him and began to look after his own money. He was fascinated by the world of finance. Mad though his friends and family thought him at the time, he put everything he owned into gold, which subsequently appreciated by several hundred per cent. Soon MoneyWeek were asking him to write a weekly column and he began seven years of obsessive reading and study. Life After the State is the culmination of that process. Just as Frisby saw the financial crash of 2008 coming, he now sees another one, even more calamitous, headed our way - only this one has serious political ramifications as well. But not one high-profile politician, economist or journalist seems to 'get it' - because not one of them has correctly identified the cause of the problem. For Frisby, the problem is the State. In every instance where government gets involved in people's lives with a desire to do good, it can always be relied on to make the situation much, much worse. Yet despite this reality, we all seem to imagine that a world without the state would be a wild and terrifying place. With wit and devastating clarity of argument, Frisby shows that human nature proves the opposite to be true. Combining the paradigm-busting wisdom of Nassim Nicholas Taleb's The Black Swan with the readable charm of Freakonomics, Life After the State is a book that will change the way you think about money, education, healthcare and social justice for ever.

Dominic Frisby is a comedian, an investment columnist for MoneyWeek and is a frequent speaker on gold and money on television, radio and at conferences. His first book Life After The State is a serious dismantling of the way societies are run in the west, outlining the damage governments unknowingly do to their people, with simple suggestions about how things can be vastly improved.