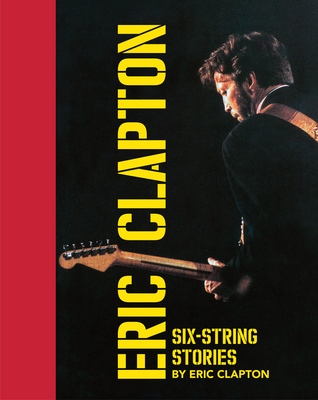 'These guitars have been really good tools; they're not just museum pieces. They all have a soul and they all come alive.' - Eric Clapton

'In his own words, Clapton tells his story through the history of his instruments.' - Rolling Stone

In Six-String Stories Eric Clapton reflects on a legendary career as told through the tools of his trade: his guitars. Collected together here for the first time are the instruments Clapton sold in three record-breaking auctions between 1999 and 2011 to benefit the Crossroads treatment centre he founded in 1998. Featuring some of the most famous guitars ever played, Clapton guides the reader through nearly 300 instruments as he discusses their provenance, reveals insights about his own playing, and shares anecdotes from each chapter of his spectacular life in music.

'One by one these guitars were the chapters of my life. They belong to a very well-loved family.' - Eric Clapton

Six-String Stories presents a 'family tree' that makes connections between iconic instruments, such as Clapton's famous 'Blackie' Stratocaster, and previously unknown rarities, placing them in the chronology of his career. Clapton recalls the instruments he bought to emulate his heroes, the guitars with unknown origins that became their own legend, the ones that never left his side, and the legacy they left behind. Every piece has been individually photographed, revealing every curve, detail and scratch, while the work of over 80 of the world's best rock photographers shows the instruments in play. See Clapton's evolution from the psychedelic Sixties, through the stripped-back Seventies, electric Eighties, and unplugged Nineties, right up to the sale of the last guitar.

'As an avid rock or blues fan, I would look at all the pictures in this book.' - Eric Clapton

Historical and technical information for each piece in the collection - including playlists and concert dates for those instruments used on records and at public appearances - completes the story behind each guitar.

'The guitars are things of great beauty.' - Eric Clapton

Eric Patrick Clapton is an English musician widely revered as rock's premier guitarist, both as a solo artist and as a former member of legendary rock groups including The Yardbirds, Cream, Blind Faith, and Derek and the Dominos. Born on 30 March 1945 and raised in a musical household, Clapton recieved his first guitar after hearing the electric blues of Freddie King, B.B. King, and Muddy Waters. He spent his early days in music busking around Richmond and Kingston, and in 1963, 17-year-old Eric joined his first band. Today, with more than 50 years of touring under his belt, Clapton has played in excess of 3,000 concerts. He has performed in 58 countries and played to over 2 billion people. He can be heard on records by Gary Brooker, Bob Dylan, Bob Geldof, Elton John, Carole King, Plastic Ono Band (John Lennon and Yoko Ono), Stephen Stills, Sting, Roger Waters and many more. Over the course of his career, Eric has received numerous awards and accolades. He has won 18 Grammy Awards, a BAFTA, and is the only triple inductee in the Rock and Roll Hall of Fame as a member of The Yardbirds, Cream and as a solo artist. In 1994, Queen Elizabeth II made Eric an Officer of the Order of the British Empire (OBE) and in 2004, she honoured him further when he was made a Commander of the Order of the British Empire, or CBE. In 1998, Eric founded the Crossroads Centre, an addiction treatment centre based in Antigua which follows the 12-step model. One of the centres main principles is to provide treatment for some of the poorest people of the Caribbean, using the centre's own foundation. To raise funds for the Crossroads Centre Foundation, Eric has held a series of Guitar Festivals and Guitar Auctions. In 1999, Clapton auctioned 100 of his guitars, including the guitar on which he recorded "Layla," which netted almost five million dollars for the foundation. A second guitar auction in June 2004 raised $6 million for the foundation and included the sale of Blackie, his legendary Fender Stratocaster. Later, Clapton hosted a concert to benefit the Centre at New York City's Madison Square Garden, as well as planning a second fundraising effort -- the Crossroads Guitar Festival in Dallas. The first festival launched in 2004, and was hosted again by Clapton in 2007, 2010, 2013 and 2019.