New Scientist: The Origin of (almost) Everything (Hardcover) 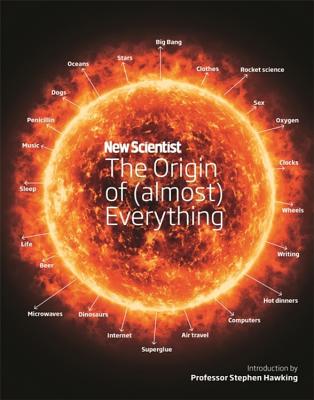 By New Scientist, Graham Lawton, Stephen Hawking (Foreword by), Jennifer Daniel (Illustrator)
Email or call for price
Out of Print

Where did we come from? How did it all begin? These are the biggest questions in the universe, and New Scientist has the answers ...

From what actually happened in the Big Bang to the accidental discovery of post-it notes, science is packed with surprising discoveries. Did you know, for instance, that if you were to get too close to a black hole it would suck you up like a noodle (it's called spaghettification), why your keyboard is laid out in QWERTY (it's not to make it easier to type) or whether the invention of the wheel was less important to civilisation than the bag (think about it). New Scientist does.

And now they and illustrator Jennifer Daniel want to take you on a whistlestop journey from the start of our universe (through the history of stars, galaxies, meteorites, the Moon and dark energy) to our planet (through oceans and weather to oil) and life (through dinosaurs to emotions and sex) to civilisation (from cities to alcohol and cooking), knowledge (from alphabets to alchemy) ending up with technology (computers to rocket science).

Witty essays explore the concepts alongside enlightening infographics that zoom from how many people have ever lived to showing you how a left-wing brain differs from a right-wing one.

Since 1956, New Scientist has established a world-beating reputation for exploring and uncovering the latest developments and discoveries in science and technology, placing them in context and exploring what they mean for the future. Each week through a variety of different channels, including print, online, social media and more, New Scientist reaches over 5 million highly engaged readers around the world.

Graham Lawton studied for a degree in biochemistry and MSc in science communication at Imperial College London, before joining the New Scientist, where he has been for almost all the 21st century, first as features editor and now as deputy editor. Shortlisted by the Association of British Science Writers, his writing and editing has won a number of awards. This is his first book.

The best-looking science book ever created. The great thing about this book is that you can get it for anyone, at any age-it's such a fun and fascinating read.—FastCompany