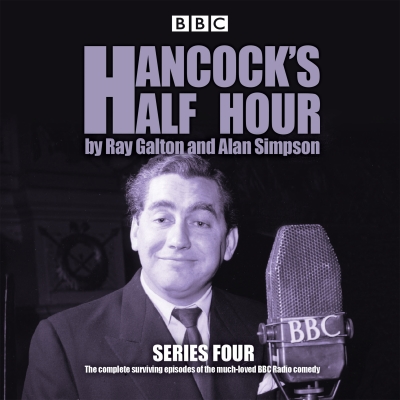 The fourth series of the legendary BBC Radio comedy series starring Tony Hancock. Created by Ray Galton and Alan Simpson in 1954, Hancock's Half Hour was the radio vehicle that made Tony Hancock a household name. Each week listeners would be admitted to the sometimes fantastical, sometimes mundane life of "the lad 'imself." Aided and abetted by Sid James, Bill Kerr, Kenneth Williams, and Hattie Jacques, Hancock would enter into the spirit of each episode with characteristic dolefulness. This volume contains all 20 episodes from the fourth radio series, collected together for the first time. In these hilarious Half Hours, Hancock moves from 23 Railway Cuttings to the dosshouse to a Scottish castle, acquires a secretary, visits the ballet, and tries his hand at a multitude of professions including agricultural laborer, coffee bar owner, and policeman . . . The episodes included are: "Back from Holiday," "The Bolshoi Ballet," "Sid James' Dad," "The Income Tax Demand," "the New Secretary," "Michelangelo 'Ancock," "Anna and the King of Siam," "Cyrano de Hancock," "The Stolen Petrol," "The Expresso Bar," "Hancock's Happy Christmas," "The Diary," "The 13th of the Series," "Almost a Gentleman," "The Old School Reunion," "The Wild Man of the Woods," "Agricultural 'Ancock," "Hancock in the Police," "The Emigrant," and "The Last of the McHancocks."

Ray Galton and Alan Simpson met in a sanatorium in Surrey, where they were both being treated for TB. Ray Galton remembers noticing the six-foot-four Simpson and thinking he looked surprisingly large. During two years in the same ward, they listened to comedy shows together and also wrote a series of their own, creating a radio room in a linen cupboard. They decided to get a professional opinion of their work and sent a sketch they had written called The Pirate Sketch to the BBC. They were asked to go in for an interview, and soon found themselves writing for the sketch show Happy Go Lucky. Over the next two years they continued to write sketches for a number of big names, before coming up with the idea for Hancock's Half Hour. Although the BBC took some persuading, eventually the show was scheduled, initially for radio but later as a television series. A phenomenally successful 10 years later, Galton and Simpson were themselves very well known names. After Hancock's Half Hour they wrote Comedy Playhouse for the BBC, out of which came their second huge television and radio hit, Steptoe & Son. In 1977 they wrote The Galton & Simpson Playhouse, produced by Yorkshire Television for ITV.