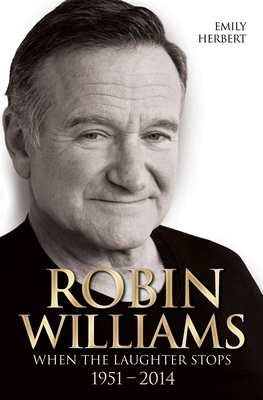 By Emily Herbert
$15.95
Available at Warehouse

At midday on August 11, 2014, much-loved comedian Robin Williams was pronounced dead at his California home. From Mrs. Doubtfire, Jumanji, and Aladdin to Good Will Hunting and Dead Poets Society, Robin Williams brought laughter—and deep joy—to a generation. He was sparklingly funny, a lightning-fast improviser, and a wonderful comic. But what touched millions of people was the warmth and compassion he exuded. The deeply tragic manner in which he took his own life has come as a shock to the world and caused people to wonder about the desperately troubled life behind the laughter he gave to millions. With Twitter igniting from record volumes of tributes to the much-loved actor, the death of Robin Williams has caused a public outpouring of grief not seen since the passing of Michael Jackson or Whitney Houston. Emily Herbert’s sensitive and thoughtful biography celebrates his genius, and attempts to understand what could have driven such a warm and gifted man to take his own life.

Emily Herbert is the author of Lady Gaga: Behind the Fame and Michael Jackson: King of Pop.