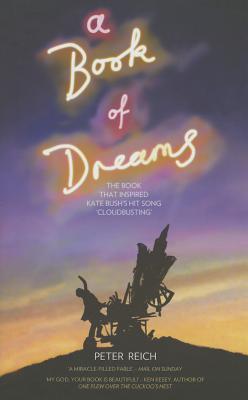 By Peter Reich
Email or call for price
Out of Print

"Cloudbusting was inspired by a book that I found in a shop. . . Written by a guy called Peter Reich, and it's called A Book of Dreams. And it's very unusual, beautiful book, written by this man through the eyes of himself when he was a child, looking at his father, and the relationship between them. Very special relationship, his father meant so much to him."  —Kate Bush

This famous book, the inspiration behind Kate Bush's 1985 hit song "Cloudbusting," is the extraordinary account of life as friend, confidant, and child of the brilliant but persecuted Austrian psychoanalyst Wilhelm Reich. Peter, his son, shared with his father the revolutionary concept of a world where dream and reality are virtually indistinguishable, and the sense of mission which set him and his followers apart from the rest of the human race.  Here, Peter Reich writes vividly and movingly of the mysterious experiences he shared with his father: of flying saucers; the "cloudbuster" rain-makers, and the FDA narks; and of the final tragic realization of his father's death, which woke him up to the necessity of living out his life in an alien world. Already regarded as a modern classic, A Book of Dreams is not only a beautifully written narrative of a remarkable friendship and collaboration, but a loving son's heartfelt tribute to a loving father.

Peter Reich, son of the controversial Austrian psychoanalyst Wilhelm Reich, who died in a US jail in 1957, was born in New York in 1944. After his father’s death, he left the USA to study French at Grenoble, eventually returning to take degrees at Bates College in Lewiston, Maine, and at Boston University School of Public Health. He has been a VISTA volunteer in Oregon, has worked with drug addicts in Boston and also as a journalist in New York, and for the past thirty years has worked at Boston University School of Medicine. He lives in Massachusetts.

"A miracle-filled fable."  —Mail on Sunday

"An extraordinary work that stirs the spirit."  —Publishers Weekly

"A book in which fantasy becomes reality."  —New York Times

"My god, your book is beautifu."’  —Ken Kesey, author, One Flew Over the Cuckoo's Nest