North From Winterfell: The Autobiography of Hodor (Paperback) 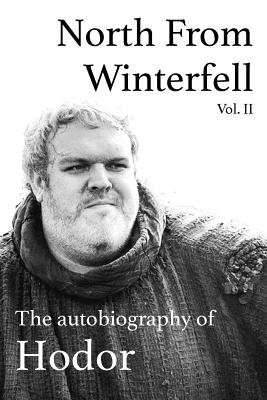 By Hodor
$17.00
Available at Warehouse

For the first time ever Hodor tells his humble, yet harrowing tale in his own words.

The great grandson of Old Nan, young Hodor (given name Wylis) began his career as a stablehand for the House Stark. Wylis often found himself overjoyed by basic things like presenting Bran with a new saddle, hearing the echo of his own voice in a well, or greeting one of the Stark direwolves. He is deeply loyal to the Starks, who have treated him very well, apart from the time Bran Stark destroyed his mind by warging into him as a child. Despite his large size and strength, Hodor is a gentle soul who is terrified by violence - even violence done by himself, as he often cowers in fear instead of fighting back against foes who are actually smaller than he is. Even so, his loyalty to the Starks is so great that he continued to follow (or rather, carry) Bran Stark through great dangers.

Again, and I can't stress this enough, Hodor tells you all this and more IN HIS OWN WORDS.