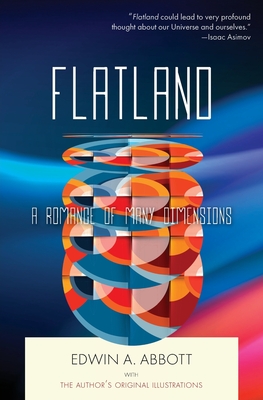 Edwin A. Abbott's hallucinatory tale has captivated readers for more than a hundred years--including contemporary scientists such as Carl Sagan and Stephen Hawking. In this mind-expanding satire, Flatland: A Romance of Many Dimensions describes a two-dimensional world organized by strict caste system of geometrical forms. The narrator, A. Square, introduces us to Flatland before describing his revelatory explorations of Lineland, a one-dimensional world, and Pointland, a world of no dimensions, and the hitherto inconceivable three-dimensional world of Spaceland, through which he is ushered by his Virgil-like guide, Sphere. In Flatland, Square is regarded as a heretic and imprisoned for his belief in the existence of a third, and possibly even a fourth, dimension.

Although it did not achieve popular success on its publication in 1884, Flatland gained a broad audience after the publication of Albert Einstein's general theory of relativity, which focused attention on the concept of a fourth dimension. The book enjoyed another renaissance with the advent of modern science fiction in the late 1930s and is now widely acknowledged as a pioneering work of mathematical fiction.

Includes the author's original illustrations and a short biography.