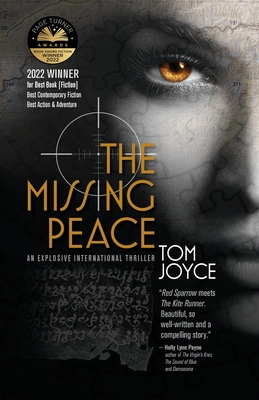 The Missing Peace blurs all traditional boundaries between fiction and fact, romance and adventure, intrigue and literature. Israeli scholar, Sonya Aronovsky, enlists a Harvard Jesuit professor to help her translate and locate the source of a mysterious manuscript she has found in her late mother's possessions, believing it holds the key to where her father, a Soviet-era helicopter pilot, went missing in action twenty years ago. But Father Daniel Callan's brilliant student-and former lover-is not who he thinks she is. In fact, Sonya is a deep-cover Mossad agent running a sting operation to ensnare "Wild Boar," the sadistic arms dealer who brokers missiles to conflict zones and traffics girls for his sex club in Istanbul. Her irresistible bait is a dozen "suitcase" tactical nuclear weapons, which Sonya believes her father was secretly transporting out of Afghanistan in 1989 when his gunship mysteriously disappeared in the Hindu Kush mountains. The action and smoldering romance ignite as Sonya and Danny are tracked by Ukrainian hit men, Russian mercenaries and CIA drones. Their expedition leads them to a fantastic archaeological find where Sonya must sift through an arcane history for clues to solve the mystery of her father's disappearance, and race against time to locate his deadly cargo before Wild Boar does.