Even If We Break (Paperback) 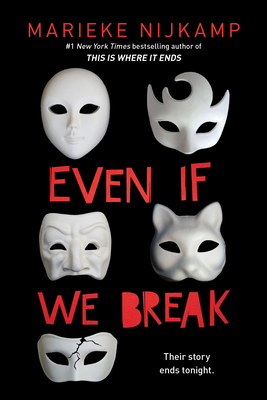 "Immersive and captivating. Thrilling in every sense of the word."--KAREN M. MCMANUS, #1 New York Times bestselling author of One of Us is Lying and One of Us is Next

From #1 New York Times bestselling author Marieke Nijkamp comes a shocking new thriller about a group of friends who go to a cabin to play a murder mystery game...only to have the game turned against them. Now in paperback

FIVE friends go to a cabin.
FOUR of them are hiding secrets.
THREE years of history bind them.
TWO are doomed from the start.
ONE person wants to end this.
NO ONE IS SAFE.

For five friends, this was supposed to be one last getaway before going their separate ways--a chance to say goodbye to each other, and to the game they've been playing for the past three years. But they're all dealing with their own demons, and they're all hiding secrets.

Finn doesn't trust anyone since he was attacked a few months ago. Popular girl Liva saw it happen and did nothing to stop it. Maddy was in an accident that destroyed her sports career. Carter is drowning under the weight of his family's expectations. Ever wants to keep the game going for as long as they can, at all costs.

When the lines between game and reality start to blend with deadly consequences, it's a race against time before it's game over--forever.

Are you ready to play?

Perfect for readers who love: teenage mystery books or YA horrorLGBT stories about intersectional groups of friendsKaren McManus, Gretchen McNeil, or Natasha Preston

Praise for Even If We Break:
"The darkly twisted ode to self-discovery briskly whisks an intersectionally inclusive group through a reasonably stormy, emotionally charged scenario that considers the sometimes-steep price of growing up and growing apart."--Publishers Weekly
"An engaging read, providing readers with some solid suspense, and twists to sink their teeth into."--Booklist
"A fast-paced thriller that will leave you both gushing over the geekiness and gasping over the game."--Rachel Strolle, Glenside Public Library District

More Teen Thrillers by Marieke Nijkamp:
This Is Where It Ends
Before I Let Go