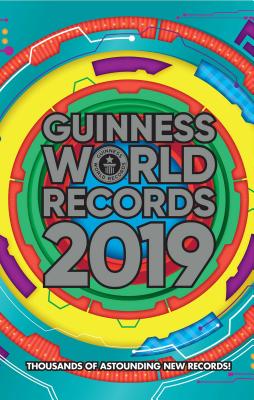 By Guinness World Records Ltd.
$8.99
On Our Shelves Now

The latest and greatest collection of astounding feats from every corner of the globe.

Updated with thousands of new categories and newly broken records, the world’s most popular record book covers everything from outer space to sporting events to human marvels of all shapes and sizes. Guinness World Records 2019 contains thousands of facts, figures, stats, photographs, and bits of trivia, making it the ultimate collection of jaw-dropping achievements.

GUINNESS WORLD RECORDS (GWR) is the global authority on record-breaking achievement. First published in 1955, the iconic annual Guinness World Records books have sold over 138 million copies in over 20 languages and in more than 100 countries. Additionally, the Guinness World Records: Gamer’s Edition, first published in 2007, has sold more than 5 million copies to date. Guinness World Records’ worldwide television programs reach over 750 million viewers annually and more than one million people subscribe to the GWR YouTube channel, which enjoys more than 300 million views per year. The GWR website receives 21 million visitors annually, and we have over 12 million fans on Facebook.