One Less God Than You: How to Answer the Slogans, Cliches, and Fallacies That Atheists Use to Challenge Your Faith (Paperback) 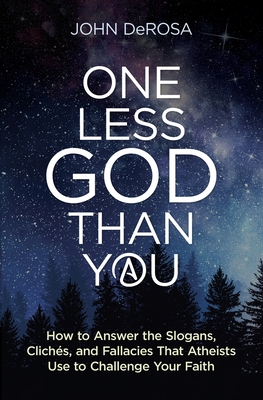 By John DeRosa
$15.95
Available at Warehouse

"The God of the Bible is a bloodthirsty dictator."

"Religion is the cause of war, suffering, and intolerance."

Whether on Twitter, in a college quad, or at the dinner table with a freshman philosophy major, you're probably familiar with the litany of slogans that religious skeptics employ in an attempt to rescue you from the foolish belief that God exists.

Even our public schools and mainstream media often can't help but parrot the memes that seem to leave thinking people with no alternative but to embrace atheism.

How can a Christian respond?

In One Less God Than You, John DeRosa breaks down twenty of the most common atheist challenges, exposes their logical weaknesses, and shows you how to craft effective answers.

Atheism is more aggressive and widespread than ever before, so believers have a crucial task. Read One Less God Than You and respond with the joyful truth that God is real.