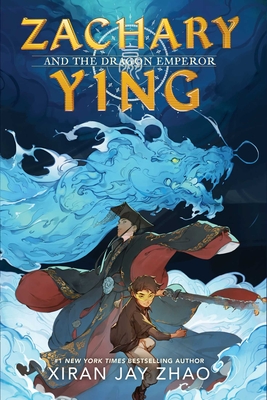 In the style of Riordan’s Percy Jackson series, yet so uniquely Xiran Jay Zhao’s story. I’m so excited for the newest generation of middle-grade readers to be able to access the varied cultural legacies of China (ancient and modern), and grapple with the moral complexity of history. Zachary Ying is relatable, educational, and once again Zhao has me eager for the next book.

“Zachary Ying is a whirlwind adventure jam-packed with folklore, action, and memes! This middle grade novel shoots a magical qi arrow right at the nexus of sci-fi and fantasy and hits. Full of heart and wit, I was hanging off of every word!”
— Jess Cooper, Joseph-Beth Booksellers, Cincinnati, OH

Percy Jackson meets Tristan Strong in this hilarious, action-packed middle grade contemporary fantasy that follows a young boy as he journeys across China to seal the underworld shut and save the mortal realm.

Zachary Ying never had many opportunities to learn about his Chinese heritage. His single mom was busy enough making sure they got by, and his schools never taught anything except Western history and myths. So Zack is woefully unprepared when he discovers he was born to host the spirit of the First Emperor of China for a vital mission: sealing the leaking portal to the Chinese underworld before the upcoming Ghost Month blows it wide open.

The mission takes an immediate wrong turn when the First Emperor botches his attempt to possess Zack’s body and binds to Zack’s AR gaming headset instead, leading to a battle where Zack’s mom’s soul gets taken by demons. Now, with one of history’s most infamous tyrants yapping in his headset, Zack must journey across China to heist magical artifacts and defeat figures from history and myth, all while learning to wield the emperor’s incredible water dragon powers.

And if Zack can’t finish the mission in time, the spirits of the underworld will flood into the mortal realm, and he could lose his mom forever.

Xiran Jay Zhao is the #1 New York Times bestselling author of the Iron Widow series. A first-gen Hui Chinese immigrant from small-town China to Vancouver, Canada, they were raised by the internet and made the inexplicable decision to leave their biochem degree in the dust to write books and make educational content instead. You can find them @XiranJayZhao on Twitter for memes, Instagram for cosplays and fancy outfits, TikTok for fun short videos, and YouTube for long videos about Chinese history and culture. Zachary Ying and the Dragon Emperor is their first middle grade novel.

Zach Ying has always had a hard time fitting in: he and his mom keep ­moving; they never have any money; and to top it all off, he’s the only Muslim ­Chinese kid at school. So when he learns that he’s meant to host the spirit of the First Emperor of China, he’s more than a little surprised. But a lot is riding on this: not only is his mom’s spirit hanging in the balance, but if Zach can’t seal the portal to the Chinese underworld in the next 14 days, the world will be overtaken by malevolent spirits. Oh, and the First Emperor didn’t properly ­possess Zach, instead attaching to his AR headset, which means Zach might have to find his own warrior spirit, something he’s pretty sure he doesn’t have. This is a creative, engaging story that will appeal to fans of ancient mythology and world history. The plot will draw readers in, but what will keep them is Zach’s struggle to belong, his journey to find himself and discover real friendship, as well as the highlighting of underrepresented mythologies. While the folklore and history might not be as ­smoothly incorporated as other ­mythological fantasies, it’s done well enough that middle grade readers won’t mind. VERDICT This new ­series will grab readers with its ­dynamic plot, video game lingo, and relatable characters. An exciting new addition to the world of ­mythology- and history-based ­adventure novels.
— School Library Journal

Zachary Ying and the Dragon Emperor is an edge-of-your-seat adventure that has you laughing on one page and cheering on the next. Zach is a gamer turned hero who goes on an epic quest across the globe only to find his greatest strength within. More, please!
— James Ponti, New York Times bestselling author of CITY SPIES

"Jam-packed with humour, heart, and hijinks, ZACHARY YING is the Chinese history class you wished you had at school. Exploring diaspora and intersectional identity in between magical heists and mythical creatures, this book is a marvel. I am officially a Xiran Jay Zhao stan!"
— Graci Kim, author of THE LAST FALLEN STAR

"I started reading it and finished it in a day! There are so many things I adore about the book from the characters to the amazing and hilarious facts about Chinese history. It had me grinning all the way! It's a wonderful book, and I will be raving about it to everyone I know for a long time."
— Ann Sei Lin, author of Rebel Skies

Twelve-year-old Zack is recruited into helping the spirit hosts of ancient Chinese emperors in a dangerous mission.

Zack has always struggled with a sense of belonging. He is the only Asian kid in his mostly White town in Maine, and, as a Uighur Muslim, he is also a minority among other Chinese and Muslims. His dissident father was executed by the Chinese government, and he faces Islamophobia in the U.S. Zack has made friends through playing Mythrealm, an augmented reality game that uses a wearable portal-lens that spawns mythical creatures from folktales and legends from around the world. When a real demon threatens Zack and his mom is attacked, ending up in a coma, he discovers a connection to the spirit of Qin Shi Huang, the first emperor of China, that gives him magical powers. Together with the spirit hosts of two other former emperors, Zack travels to China in an attempt to save his mother’s life and prevent an otherworldly disaster. This science-fiction/fantasy mashup incorporates Chinese history and mythology into relentless action. Thrilling battles and chase and heist scenes are balanced with a droll sense of humor and quieter moments that explore Zack’s complex relationship with his cultural identity, including criticism of Chinese government policies that oppress Muslims.

Levels up legendary Chinese heroes and folklore into a thrilling adventure with video game appeal. (Fantasy. 9-13)

Zhao’s (Iron Widow) action-packed middle grade debut transports readers to a 12-year-old’s encounters with legendary Chinese figures who connect him to his personal history. Gamer Zachary Ying desperately wants to fit in outside the virtual world of Mythrealm, but as the only Asian kid in his largely white Maine town, he finds himself quietly suffering microaggressions and peer pressure to avoid standing out. Zack’s Chinese family is also Hui Muslim, a minority among other Chinese and Muslim people, but he knows little about his family legacy outside of his father’s execution by the Chinese government for speaking out against its "oppression of Uighur Muslims and other minorities." So when an attack on his mother leaves her soul in the hands of demons, and Zack is revealed to be descended from China’s first emperor, Qin Shi Huang, he feels overwhelmed and unprepared. Things are further complicated when the Dragon Emperor bonds to Zack’s gaming headset, needing the boy to host his spirit. Now, Zack must travel across China and carry out a vital mission with the fate of the mortal realm at stake. Compact history lessons woven throughout guide Zack through the plot and into a greater understanding of his identity, while plentiful pop culture references root this fantastical read in the contemporary, making for a quickly paced book that’s by turns educational, reflective, and thrilling. Ages 8–12. Agent: Rachel Brooks, BookEnds Literary. (May) Correction: The text of this review has been updated for clarity.
— Publishers Weekly