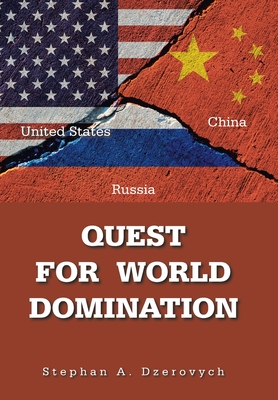 With the dissolution of the Soviet Union on December 26, 1991, the United States clearly became the only Superpower in the world. Having triumphed over Communism, the United States was confident it could export its vision of liberal democracy, in which individual rights and freedom under the rule of law are protected, to the rest of the world. The United States preoccupation with Iraq, Iran and Afghanistan for the past 30 years to instill a measure of democracy in these countries allowed Russia and China time to strengthen their positions in the world. The book describes the uphill battle the US now wages against Russia and China for world domination.

The author has worked as an electronics engineer for the U.S. Navy in the Field of Anti-Submarine Warfare [ASW] for forty years [1957-1997]. As Head of the Intelligence Branch of the Naval Applied Science Laboratory in New York City, he had responsibility for development of intelligence systems related to the Navy's ASW programs. Later in his career, the author worked as Head of the Sonar Development Branch of the Naval Undersea Warfare Center in New London, Connecticut and Newport, Rhode Island. His responsibilities included the conduct of programs in the areas of submarine sonar and ocean surveillance. During his career the author participated on numerous panels and committees related to acoustic intelligence and sonar systems. In addition, he provided consultations and recommendations on intelligence and technical matters to the Chief of Naval Operations and Naval Sea Systems Command in Washington D.C. The author was born in Lviv, Ukraine in 1934. In his youth he attended schools in Ukraine, Poland, Czechoslovakia and Austria. In 1949, he immigrated with his parents, brother and sister to the United States. The author graduated from the City College of New York with a Bachelors of Mechanical Engineering degree in 1957 and received a Masters of Public Administration degree from the University of Northern Colorado in 1976. The author has traveled widely in Europe, South America and Canada. His personal interests are in the areas of world history and world affairs, and he has read numerous books on these subjects. "Quest For World Domination" is the author's third book. The first book, "The Wind Blows to the East" published by Author House in 2005, accurately predicted the rise of China to superpower status in East Asia and the onset of the Islamic terrorism. The second book, "Will Ukraine Bloom Again" was also published by Author House in 2017. The book narrates the history of Ukraine and addresses its recent turbulent times. Finally, it provides the answer to the question: "Will Ukraine Bloom Again?". The author's father, Bohdan Dzerovych, was a prominent lawyer and judge in Lviv, Ukraine. He served as Lieutenant in the Ukrainian Regiment of the Austro-Hungarian Army during World War I. He was the Deputy Minister of Justice in the government of the Ukrainian State in 1941. The author has two daughters, Daina and Stephanie. He also has four beautiful granddaughters, Mia, Emma, Reese and Aria, and a handsome grandson, Owen.