That Time I Got Reincarnated as a Slime: Trinity in Tempest (Manga) 5 (Paperback) 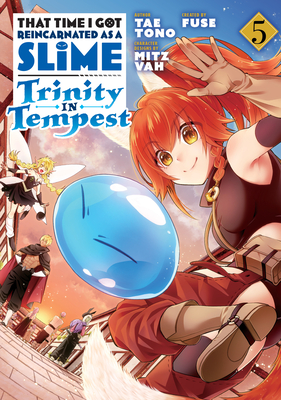 This is book number 5 in the That Time I Got Reincarnated as a Slime: Trinity in Tempest (Manga) series.

The new spinoff manga to the hit fantasy isekai series, developed by original creator Fuse! Against the odds, the little slime Rimiru has established his magical kingdom for all monsters, called Tempest, and it's thriving. But three visitors, Phos the fox girl, Stella the dragon girl, and Nemu the winged girl, come to pay Tempest a visit, they're stunned at just how quickly it's developed. Don't miss this new story in the world of Slime, just as the second season of the anime arrives!

Rimuru has successfully become a Demon Lord, and has brought Shion and the others back to life. But there's still a difficult road ahead as they work to reconstruct the city while accepting refugees from the besieged Animal Kingdom of Eurazania. Phos steps up to guide the refugees, but tensions between the monsters and their guests run high due to the lycanthropes' custom of respecting strength above all else. The fight is far from over—but as Tempest stands on the precipice of a war with Demon Lord Clayman, will the other nations stand with them?

Fuse is the creator of the hit light novel series That Time I Got Reincarnated as a Slime, which has been adapted into a successful manga, television anime, and more.

Tae Tono is a manga artist whose English-language debut is That Time I Got Reincarnated as a Slime: Trinity in Tempest.