On Assignment: Memoir of a National Geographic Filmmaker (Hardcover) 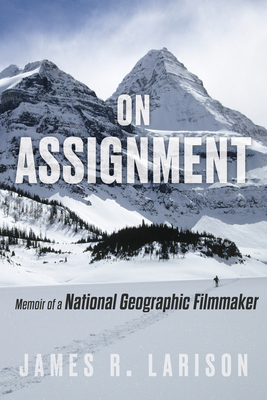 An exciting adventure story with personal drama and high stakes, as well as a glimpse behind the scenes of the highly regarded National Geographic brand

Jim and Elaine Larison spent years studying, exploring, and living in wild places, making more than thirty environmental films, most for the National Geographic Society. These films won more than forty international awards from leading environmental and broadcast organizations. This memoir tells the story behind the adventure and describes the rather substantial personal costs of this career.

While shooting film in Alaska, Jim Larison narrowly survived a devastating airplane crash in the Bering Sea. Later, while filming on the Great Barrier Reef, the Larisons fought off an aggressive twelve-foot tiger shark. Midway through their careers, the Larisons were nearly swept to their deaths by an icefall while filming on Mount Robson. A thrilling adventure story, full of risk and personal conflict, On Assignment is also a touching look at the tender bonds that held the married couple together while they struggled to complete their many film assignments.

The Larisons were changed by what they saw and what they captured on film: the destruction of forests, the death of coral reefs, and global warming.

In the beginning, the Larisons wanted nothing more than to spend time in the wilderness. By the end, they were fighting for its very survival.

James Larison is a retired university professor who spent most of his career on the faculty of Oregon State University serving as a teacher, research scientist, and university administrator. For much of that same period of time, he also produced, photographed, and wrote more than thirty films for the National Geographic Society. He has also published original research in Nature and the Auk, and has written and edited a dozen literature publications as director of communications for a Sea Grant College. He lives in Oregon.

“Excellent and profoundly moving. James Larison is a master storyteller who’s produced an adventure yarn and love story as deeply rewarding as his best films. On Assignment is insightful and inspiring, honest, engaging, and most of all, immensely entertaining.” —Kevin Grange, author of Wild Rescues: A Paramedic's Extreme Adventures in Yosemite, Yellowstone and Grand Teton


“James Larison’s book On Assignment is a compelling real-life adventure filled with danger and survival. I think readers will be on the edge of their seats when learning about the difficulties of filming for National Geographic. It would make a brilliant movie.” —Carl Ziebe, National Geographic Society Assistant Director, Educational Films


“Good writing, great stories! If you like National Geographic, you’ll love this book. Larison’s journey is truly one of adventure and a life well lived.” —Jack Gustafson, Wildlife Biologist, Alaska Department of Fish and Game

“No one works harder on his films than Jim Larison. . . . Technically and aesthetically, his films are simply unmatched among those produced for and by the National Geographic Society’s Educational Film Department. . . . But what drives these films—and what is integral to their success—is more than technical prowess with a motion picture camera and a refined aesthetic sensibility; it is, as well, a passion for the subject at hand and a depth of knowledge about it.  Jim’s passion for ecology, biodiversity, and the health of the environment is what fuels his desire to make his films the most effective communication tools they can possibly be.” —Donald M. Cooper, Associate Director and Acting Director, Educational Films, The National Geographic Society

“This captivating book gains elevation by the page, until we soon find ourselves in the rarefied air of an adventure memoir that engages on both the visceral and cerebral level. Larison has penned a vivid chronicle rich with hard-won wisdom and brimming with life.” —Chris Dombrowski, author of Body of Water

"For anyone interested in the natural world, the book offers vicarious thrills as well as Larison’s perspective on environmental issues, drawn not only from his scientific training and research but also from his experience making more than 30 films during the 1980s and 1990s for the National Geographic Society, as well as for PBS and Discovery." — The Oregonian

"Fans of the great outdoors will appreciate this introspective and sentimental outing." — Publishers Weekly