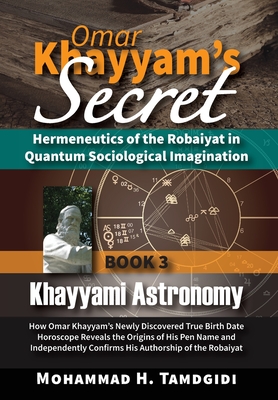 Omar Khayyam's Secret: Hermeneutics of the Robaiyat in Quantum Sociological Imagination is a twelve-book series of which this book is the third volume, subtitled Khayyami Astronomy: How Omar Khayyam's Newly Discovered True Birth Date Horoscope Reveals the Origins of His Pen Name and Independently Confirms His Authorship of the Robaiyat. Each book is independently readable, although it will be best understood as a part of the whole series.

In the overall series, the transdisciplinary sociologist Mohammad H. Tamdgidi shares the results of his decades-long research on Omar Khayyam, the enigmatic 11th/12th centuries Persian Muslim sage, philosopher, astronomer, mathematician, physician, writer, and poet from Neyshabour, Iran, whose life and works still remain behind a veil of deep mystery. Tamdgidi's purpose has been to find definitive answers to the many puzzles still surrounding Khayyam, especially regarding the existence, nature, and purpose of the Robaiyat in his life and works. To explore the questions posed, he advances a new hermeneutic method of textual analysis, informed by what he calls the quantum sociological imagination, to gather and study all the attributed philosophical, religious, scientific, and literary writings of Khayyam.

Omar Khayyam's true birth date horoscope, as newly discovered in this series, is comprised of a dazzling number of Air Triplicities sharing a vertex on a Sun-Mercury Cazimi point on the same Ascendant degree 18 of Gemini. Among other features, his Venus, Sextile with Moon, also plays a lifelong, secretively creative role to intentionally balance his chart. These features would not have escaped the attention of Omar Khayyam, a master astronomer and expert in matters astrological, no matter how much he embraced, doubted, or rejected astrological interpretations.

In this third book of the series, conducting an in-depth hermeneutic analysis of Khayyam's horoscope, Tamdgidi reports having discovered the origins of Khayyam's pen name in his horoscope. The long-held myth that "Khayyam" was a parental name, even if true, in no way takes away from the new finding; it only adds to its intrigue.

Tamdgidi's hermeneutic analysis of Khayyam's horoscope in intersection with extant Khayyami Robaiyat also leads him to discover an entirely neglected signature quatrain that he proves could not be from anyone but Khayyam, one that provides a reliably independent confirmation of his authorship of the Robaiyat. He also shows how another neglected quatrain reporting its poet to have aged to a hundred is from Khayyam. This means all the extant Khayyami quatrains are now in need of hermeneutic reevaluation.

Tamdgidi's further study of a sample of fifty Khayyami Robaiyat leads him to conclude that their poet definitively intended the poems to remain in veil, that they were considered to be a collection of interrelated quatrains and not sporadic separate quatrains written marginally in pastime, that they were meant to offer a life's intellectual journey as in a "book of life," that the poems' critically nuanced engagement with astrology was not incidental but essential throughout the collection, and that, judging from the signature quatrain discovered, 1000 quatrains were intended to comprise the collection.

Oddly it appears that, after all, "The Khayyam who stitched his tents of wisdom" was a trope that had its origins in Omar Khayyam's horoscope heavens.