Lift Your Voice: How My Nephew George Floyd's Murder Changed The World (Hardcover) 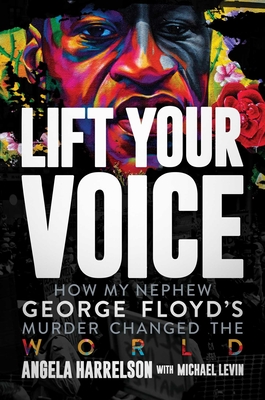 Angela Harrelson, George Floyd’s aunt and closest relative in Minnesota, tells the behind-the-scenes story of George’s family—how he lived and why he died—and how the world can find a solution to racism through his death.

Angela Harrelson grew up poor, one of thirteen brothers and sisters raised in a shack in the North Carolina woods. She was first in her family to go to college, first to be commissioned in the military, and first to have a career as a professional nurse. Along the way, she and her family were exposed to the harshest forms of racism—from her childhood riding the school bus with white children who made the Black kids stand, to racist commanding officers in the Air Force who told her they wanted her to fail.

Nothing stopped Angela, and nothing removed the hope in her heart that America could learn to stop hating people based on the color of their skin. This is the story of George Floyd’s aunt, Angela Harrelson, and how, after being suddenly thrust into the spotlight, she went on a quest to make sure her nephew did not die in vain.

Lift Your Voice is a memoir of faith, hope, and bravery, of what we all—Black and white—need to do to eradicate racism from our society. It’s a story of tragic loss and a worldwide uprising to ensure Perry’s death ushers society into a time where people are no longer judged, hated, or killed because of the color of their skin.

Angela Harrelson is a registered nurse living and working in Minneapolis. She is George Floyd’s aunt and his closest relative in Minnesota.

New York Times bestselling author Michael Levin has served for more than thirty years as a volunteer counselor in the alcohol and drug field. He has worked with thousands of individuals and families across the United States. He lives with his family in Bergen County, New Jersey.

“The publicly witnessed murder of George Floyd ignited an acute awareness that racism is still prevalent in America, perhaps unlike anything experienced in decades. This moving book will ensure that the legacy of George Floyd lives on, and challenges those left behind to effect change—and ultimately work together to prevent the repeat of such tragedies.”
— John Hope Bryant, Founder and CEO, Operation Hope