Maritime Strike: The Untold Story of the Royal Navy Task Group Off Libya in 2011 (Hardcover) 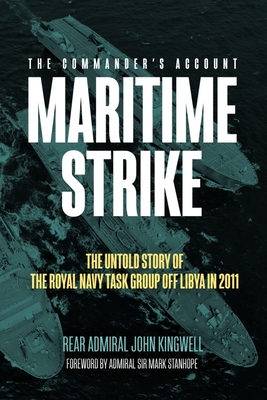 Leadership under pressure: the personal account of the commander of the Royal Naval Task Group deployed to Libya in 2011.

In April 2011, the newly created Royal Navy Response Force Task Group deployed to the Mediterranean to provide a range of military options in response to the Arab Spring. For the next six months the group planned and prepared for a range of potential operations including noncombatant evacuations from Libya, Yemen and Syria, maritime interdiction operations off the Libyan coast, and amphibious landings.

On 3 June the group began launching attack helicopter strikes into Libya and in the nights that followed planned 47 and executed 22 strikes destroying a range of targets including: 54 vehicles, 2 rigid hull boats, 2 BM 21 rocket launchers, 4 main battle tanks, 1 zsu antiaircraft vehicle and 3 command and control nodes. The operation saw the first operational use of Apaches from the sea and the first embarkation of US Army combat search and rescue teams and Blackhawk helicopters in an RN warship.

This is a personal account by the Group's Commander, which brings to life the challenges of command - including authorizing strikes and mitigating risk to UK aircrew - in a complex and challenging environment. It reveals how closely the RN Group worked with its French counterpart, the support provided by the United States, together with the complexity of working alongside NATO and of simultaneously dealing with a range of UK authorities.

This is a story of leadership under pressure and the remarkable professionalism of all involved and the bravery of Army aircrew. It was modern defense and joinery at its best - UK and US Army Helicopters operating from RN ships, supported by Fleet Air Arm aircraft and fixed wing jets as part of a largely air campaign.