Divided We Stand: The Battle Over Women's Rights and Family Values That Polarized American Politics (Paperback) 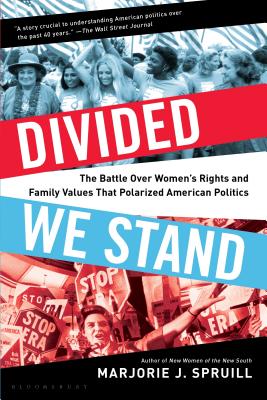 The fascinating true story of the characters in Hulu's "Mrs. America" and a broader portrait of the two women's movements that spurred an enduring rift between liberals and conservatives.

"The many admirers of 'Mrs. America' . . . will find great satisfaction in [Divided We Stand] . . . a clear, compelling and deeply insightful volume." —The Washington Post

In the early 1970s, an ascendant women’s rights movement enjoyed strong support from both political parties and considerable success, but was soon challenged by a conservative women’s movement formed in opposition. Tensions between the two would explode in 1977 at the congressionally funded National Women’s Conference in Houston, Texas. As Bella Abzug, Gloria Steinem, and other feminists endorsed hot-button issues such as abortion rights, the ERA, and gay rights, Phyllis Schlafly and Lottie Beth Hobbs rallied with conservative women to protest federally funded feminism and launch a pro-family movement.

Divided We Stand reveals how crucial women and women’s issues have been in the shaping of today’s political culture. After the National Women’s Conference, Democrats continued to back women’s rights in cooperation with a more diverse feminist movement while the GOP abandoned its previous support for women’s rights and defined itself as the party of family values, irrevocably affecting the course of American politics.

Marjorie J. Spruill is Distinguished Professor Emerita of History from the University of South Carolina. She is the author of New Women of the New South and the editor of numerous anthologies including One Woman, One Vote. Spruill’s research for Divided We Stand was supported by fellowships from the Radcliffe Institute for Advanced Study at Harvard University, the Woodrow Wilson International Center for Scholars, and the National Endowment for the Humanities. She lives in South Carolina.

“Spruill…convincingly traces today's schisms to events surrounding the National Women's Conference, a four-day gathering in Houston in November 1977. These divergent narratives from 40 years ago offer many lessons to those hoping to maintain the momentum of the Jan. 21 women's marches.” —New York Times Book Review

“Marjorie Spruill describes a polarized America that will be recognizable to any consumer of today's news…A story crucial to understanding American politics over the past 40 years…The question raised by the battle of 1977--who speaks for women?--still bedevils American politics.” —Wall Street Journal

“While the shortcomings of the women's movement in protecting their advances is well-documented in this book, it is the rise of conservative women and how they redirected the Republican Party's positions that makes the book so interesting. Feminists and supporters of women's rights will find this difficult to swallow, but this is an important book for them to read.” —New York Journal of Books

“Fascinating…DIVIDED WE STAND evokes two movements, two equal mobilizations, struggling over the role of women in America.” —The Nation

“The NWC [National Women's Conference] featured people and political trends whose significance is all the greater given the election's outcome. The book details how the conference provoked a bitter debate between feminists and conservative women activists…[Spruill's] interviews of key participants both illuminate the narrative and preserve first-hand accounts for future scholars.” —Washington Independent Review of Books

“Spruill strives to be evenhanded, pointing out the mistakes and excesses of both sides…DIVIDED WE STAND lucidly explains just how we got so divided.” —Dallas Morning News

“Spruill's project of historical reclamation is an important one … The value of reconstructing those days [of the 1977 National Women's Conference] and pondering their meaning for the light they might shed on ours is unquestionable.” —New York Review of Books

“Noted historian Marjorie J. Spruill has written a well-researched, detailed history of the modern-day fight over women's rights and its 'essential role' in bringing the United States to the fractious state we currently endure . . . Divided We Stand is essential for understanding the recent past as well as the present.” —Southwestern Historical Quarterly

“An outstanding study of the National Women's Conference (NWC). Published to coincide with the conference's fortieth anniversary, Divided We Stand is the first book to fully explore this momentous event . . . [Spruill] places readers in strategy sessions and frontline skirmishes, allowing them to feel what it was like to be a part of the buildup to and the aftermath of the NWC.” —Journal of Southern History