"the Most Dangerous Communist in the United States": A Biography of Herbert Aptheker (Paperback) 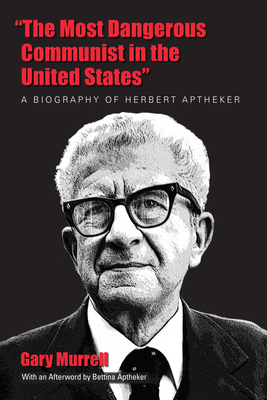 By Gary Murrell, Bettina Aptheker (Afterword by)
Email or call for price
Subject to Availabilty

When J. Edgar Hoover declared Herbert Aptheker "the most dangerous Communist in the United States," the notorious FBI director misconstrued his true significance. In this first book-length biography of Aptheker (1915-2003), Gary Murrell provides a balanced yet unflinching assessment of the controversial figure who was at once a leading historian of African America, radical political activist, literary executor of W. E. B. Du Bois, and lifelong member of the American Communist Party. Although blacklisted at U.S. universities, Aptheker published dozens of books, including the groundbreaking American Negro Slave Revolts (1943) and the monumental seven-volume Documentary History of the Negro People (1951-1994). He also edited four volumes of the correspondence and unpublished writings of Du Bois, an achievement that Eric Foner, writing in the New York Times Book Review, called "a milestone in the coming of age of Afro-American history." As Murrell shows, Aptheker the historian was inseparable from Aptheker the leading Communist Party intellectual, polemicist, and agitator. During the 1960s, his ability to rouse and inspire both black and white student radicals made him one of the few Old Leftists accepted by the New Left. Aptheker had joined the CPUSA during its heyday in the 1930s, convinced that only through the party's leadership could fascism be defeated and true liberation be achieved: he ended his affiliation five decades later in 1991 after the collapse of socialism in the Soviet Union and Eastern Europe. In an afterword, Bettina Aptheker adds to Murrell's narrative by illuminating her mother Fay's vital contributions to her father's work and by affirming the particularly devastating challenges of life in a family dedicated to radical political and social change.

Gary Murrell is professor of history at Grays Harbor College. His website is http: //www.garymurrell.com/home.html.