Songs Only You Know: A Memoir (Paperback) 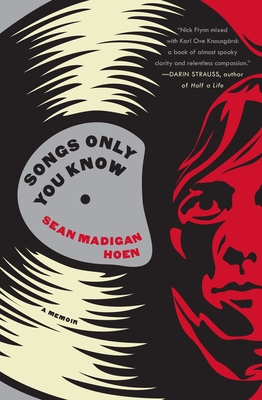 Songs Only You Know begins in late ‘90s Detroit and spans a decade during which a family fights to hold together in the face of insurmountable odds. Sean’s father cycles from rehab to binge, his heartsick sister spirals into depression, and his mother works to spare what can be spared. Meanwhile, Sean seeks salvation in a community of eccentrics and outsiders, making music Spin magazine once referred to as “an art-core mindfuck.” But the closer Sean comes to realizing his musical dream, the further he drifts from his family and himself.

By turns heartbreaking and mordantly funny, Songs Only You Know is an artful, compassionate rendering of the chaos and misadventure of a young man’s life.

“Few books convey the fever-pitch intensity of youth with such vividness and so little glamorization, or as deeply explore the heartbreaking complexity of family — both those we're born into and the ones we choose.” —Rolling Stone Magazine

Sean Madigan Hoen was raised in Dearborn, Michigan and spent his young adulthood touring and recording in several Detroit-based music groups, including Thoughts of Ionesco, The Holy Fire and Leaving Rouge. His fiction has appeared in numerous publications, including BOMB Magazine, where he was awarded the 2011 Fiction Award. He has taught creative writing at Columbia University and currently resides in Brooklyn, New York. Songs Only You Know: A Memoir is his first book.

"[Songs Only You Know is a] gritty, gripping punk-rock memoir . . . nuanced and poetic. It's funny at times, always brutally honest; a half-healed bruise, tender and multi-colored. Few books convey the fever-pitch intensity of youth with such vividness and so little glamorization, or as deeply explore the heartbreaking complexity of family—both those we're born into and the ones we choose."
—Rolling Stone

"Unsettling and riveting . . . Prompts us to reflect on our own demons, and how we've tried to—and perhaps succeeded in—exorcising them. The grit and guts of Songs Only You Know goad us into this introspection and stir anticipation for his next book."
—Time Out New York

"A Kerouac-like saga fueled with energy and ecstasy. [Hoen] chronicles the small audience clubs and cities through an alcohol- and drug-addled haze. Don’t be fooled that this might be strictly a wild ride about the punk music scene because it certainly isn’t . . . Ultimately, it is the honesty and passion with which he writes that overwhelms the reader."
—Pittsburgh Post-Gazette

"Eschewing rock ’n’ roll memoir stereotypes, Songs doesn’t glorify sex and drugs, instead exploring the harder parts of romance and addiction . . . the reader is exposed to every inch of Hoen’s struggle with keeping his family together through near-insurmountable circumstances while trying to keep his personal life in some semblance of order and keep his musical flame from being extinguished. It’s a compelling, engrossing read."
—Alternative Press

"A moving, often harrowing story that's much more than just a tour diary of the Detroit hardcore scene in which Hoen grew up."
—Revolver Magazine

“Songs Only You Know screams at you, its limbs flail, and parts of it provoke a visceral reaction that might have you setting down the book for a few moments to catch your breath... one hell of a book.”
—Flavorwire, Book of the Week

"[O]ne of the only punk memoirs you’ll ever have to read."
—Flavorwire, 10 Must-Read Books for April

"Sean Madigan Hoen's Songs Only You Know is a candid and skillfully told memoir of dysfunctional family, addiction, and the power of music."
—Largehearted Boy

"Songs Only You Know is a truly moving book, full of pain, longing, strangeness and even grim comedy, and one of its greatest triumphs is the way Hoen describes a certain creative intensity—youthful, monstrous, fragile—that is both life-giving and dangerous, especially in troubled times. Maybe everybody has a song, but Hoen sings his with fresh phrasing and genuine feeling."
—Sam Lipsyte, author of The Fun Parts

“Here is a writer with a musician’s awareness, the deep breath in before a long scream, the cocked bat, that ‘harsh internal music’ building as one of Songs strongest themes tries to comprehend the incomprehensible . . . [Songs Only You Know] feels boundless, containing whole worlds of darkness and sweet domestic family life.”
—PASTE

“Brutally honest, and yet tender and introspective . . . Hoen deserves comparisons with Nick Flynn or Tobias Wolff for his depiction of a young man growing up in a world of family trouble and showing how we negotiate the ties and hard love that bind us. It also captures (as its dismal yet somehow hopeful backdrop) decaying rustbelt Detroit as well as anything Charlie LeDuff or Jim Daniels have done, which is saying something.”
—The Rumpus

"An unbound, raw, and cathartic expression of pain for [Hoen] . . . It hits deep."
—Razorcake

"[Hoen] looks back on a life battling adversity with brutal honesty and humility, and is able to see the comedy in the worst things that life has to offer. In addition, despite the darkness, his description of the local hardcore scene makes you wish you were there (if you weren’t)."
—Detroit Metro News

"[A] unique literary voice . . . almost eye-wateringly as he switches from mordantly funny to intensely honest, with a skeletal insight into a fanily in crisis and an emerging subculture."
—Vive le Rock

“Hoen is a particularly gifted writer who writes evocatively about Detroit's hardcore punk scene and decaying Midwest cities of the 1990s.”
—Michigan Live

“[Hoen’s writing] retains the sharp tang of honesty . . . If you ever wondered what the punk life was like, this'll tell ya, and it ain't pretty; if you ever lived it, this'll remind ya; and even if you don't give a shit either way, Songs Only You Know will interest you.”
—Mark S. Tucker for FAME

“The manner in which Hoen describes people and events is spot-on, dropping readers into the action so convincingly that they’ll have to remind themselves that these are Hoen’s memories, not ours . . . stabbing at the heart of the human condition and resonating long after the book jacket is closed.”
—Examiner.com

"To say Songs Only You Know is a gritty tale would be a gross understatement. Equal parts Catcher in the Rye, Rumble Fish, and Purple Rain, it’s the travelogue of a misguided minstrel . . . [stabs] at the heart of the human condition and resonating long after the book jacket is closed."
—North Coast Voice

“[This] tragic tale . . . is the type of tale that pulls the reader in.”
—Mississippi Sun Herald

"Hoen shares his musical journey with us, warts and all, taking us into his dark world with unflinching passages . . . I found myself immediately sucked into Hoen's world from the very first chapter; the writing and the stories are so good that I couldn't put it down."
—Pure Grain Audio

"An astonishing well-written debut . . . a deeply emotional trip through Hoen’s formative years and an inspiration to the many of us who have shared similar challenges."
—Book Patrol

“Astute and intensely self-aware, Hoen writes furious prose with a storyteller’s eye for detail . . . there’s no question that Hoen is a gifted, impassioned writer with a deep understanding of longing and pain.”
—Booklist

"Perceptive, sprawling memoir of a young man’s escape from cascading family tragedies into the noise-punk underground . . . A dark, knowing look at addiction, rock ’n’ roll, and the ties that bind."
—Kirkus Reviews

"I don’t know anyone who has described that terrible yearning for ecstasy and immolation through music as lucidly as Sean Madigan Hoen in Songs Only You Know. Only a thorough initiate of the scene who also had some genius with language could summon the demotic yet electric voice for the job. If there is ruefulness, now, for the way he treated his body, his girlfriends, and his family, he wisely reprises in his book, in neon detail, the fever that once placed him in the same drunken boat with Iggy Pop, Rimbaud and Artaud."
—Jaimy Gordon, National Book Award-winning author of Lord of Misrule

"Here's what you get when you mix Nick Flynn with Karl Ove Knausgaard: a book of almost spooky clarity and relentless compassion. I bet when Songs Only You Know gets translated to Norwegian they'll call it My Struggle (With Drugs and Rock-n-Roll). Which would kind of get it, and kind of wouldn't. Because it's also universal, and ridiculously readable, and Hoen has, in this memoir, brought his life pinned and wriggling to page, and you can't help but be moved by it, and even find yourself changed."
—Darin Strauss, National Book Critics Circle award-winning author of Half a Life

“Sean Madigan Hoen puts raw need indelibly on the page—the need for family, for belonging, for alcohol and drugs, and for a music that will burn all those things away (and if the music fails, try more alcohol and drugs). Hoen’s younger self thinks, ‘To achieve self-invention, you first evacuate the truest parts of yourself,’ not quite knowing yet that the sort of evacuation he craves is only ever temporary: the check always comes due. This moving, often brutal memoir records Hoen’s long journey back toward the truth.”
—Bill Clegg, author of Portrait of an Addict as a Young Man

"Sean Madigan Hoen is not merely an immensely gifted writer, but also a seeker—of redemption, of clarity, of hard family history. There are moments of Songs Only You Know that seem almost too painful to bear—but only almost. What carries the reader through is both the naked beauty of the prose and the deep human certainty that it is always better to face the truth than to flinch away from it. No flinching here. I admired every page of it."
—Elizabeth Gilbert, #1 New York Times bestselling author of Eat, Pray, Love and The Signature of All Things

“It's an odd feeling to have, to not want a book to end when it covers so many miserable and sometimes manic moments in a life, but that's how I felt reading this fantastic, honest, unsentimental and finally generous-hearted book.”
—Rivka Galchen, author of Atmospheric Disturbances

"Songs Only You Know is cigarettes and buck knives, crabgrass and asphalt, rolling brownouts and horseshit vinyl. Sean Madigan Hoen offers the best things a writer can offer a reader: the big heart, the big hurts, the big bad news about the impermanence of life's gig."
—Kyle Minor, author of Praying Drunk

“Sean Hoen has written a wise and moving memoir about anger, rock music and the endurance of familial love. For Hoen the ultimate redemption is rendering honestly the hard facts of his own transgression, while never losing track of the beauty and kindness that are also, thank goodness, ineradicable aspects of human existence.”
—Stephen O’Connor, author of Here Comes Another Lesson

"Like the best rock and roll memoirs, Songs Only You Know is as propulsive as the music it describes. But what truly sets this book apart is Hoen’s unflinching ability to portray dire situations while still being generous in his recollections. These searing shards of life are stamped into the page with genuine empathy."
—Jeff Jackson, author of Mira Corpora