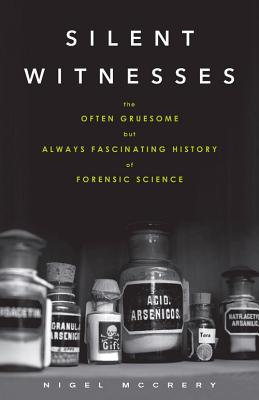 Crime novelist and former police officer Nigel McCrery provides an account of all the major areas of forensic science from around the world over the past two centuries. The book weaves dramatic narrative and scientific principles together in a way that allows readers to figure out crimes along with the experts. Readers are introduced to such fascinating figures as Dr. Edmond Locard, the “French Sherlock Holmes”; Edward Heinrich, “Wizard of Berkeley,” who is credited with having solved more than 2,000 crimes; and Alphonse Bertillon, the French scientist whose guiding principle, “no two individuals share the same characteristics,” became the core of criminal identification. Landmark crime investigations examined in depth include a notorious murder involving blood evidence and defended by F. Lee Bailey, the seminal 1936 murder that demonstrated the usefulness of the microscope in examining trace evidence, the 1849 murder of a wealthy Boston businessman that demonstrated how difficult it is to successfully dispose of a corpse, and many others.

Nigel McCrery was a police officer before he joined the BBC in 1990. There he has worked on a number of documentaries and created various series, including the crime/forensics drama Silent Witness. He is the author of several crime novels, including Still Waters.

"It is a fascinating story and makes for a thoroughly good read." —Guardian

"A convincing and readable history of a science defined by the simple maxim: 'Every contact leaves a trace.'" —Times

“For those looking for insight into the early days of forensics, this is a fascinating and informative work, a great entry point. Of special note is the chapter on DNA testing, where the author plays a role in identifying the remains of the Romanovs, the former Russian royal family.” —Publishers Weekly

“Where McCrery really shines is in his storytelling, which is no surprise given his background as a successful crime novelist. While certain technical portions may be difficult for some readers, true-crime enthusiasts will find the payoff worth the effort.” —Kirkus

“Silent Witnesses is an easily accessible and well-written primer on the history of forensic science. It reads like a work of fiction but offers the reader a clear history of many of the most important advances in forensic investigative techniques...Silent Witnesses is a delightful journey through the evolution of forensic science and a very useful introduction to the subject. Highly recommended.” —New York Journal of Books

"The book weaves dramatic narrative and scientific principles together in a way that allows readers to figure out crimes along with the experts." —BookTrib