A Brief History of Everything (20th Anniversary Edition) (Paperback) 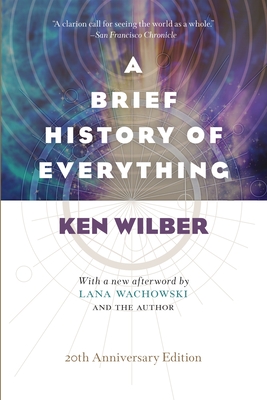 “A clarion call for seeing the world as a whole,” this philosophical bestseller takes readers on a journey through time, tracing history from the Big Bang through the 21st century (San Francisco Chronicle)

Join one of the greatest contemporary philosophers on a breathtaking tour of time and the Cosmos.—from the Big Bang right up to the eve of the twenty-first century. This accessible and entertaining summary of Ken Wilber’s great ideas has been expanding minds now for two decades, providing a unified field theory of the universe. Along the way, Wilber talks on a host of issues related to that universe, from gender roles, to multiculturalism, environmentalism, and even the meaning of the Internet.

This special anniversary edition contains an afterword, a dialogue between the author and Lana Wachowski––the award-winning writer-director of the Matrix film trilogy––in which we’re offered an intimate glimpse into the evolution of Ken’s thinking and where he stands today. A Brief History of Everything may well be the best introduction to the thought of this man who has been called the “Einstein of Consciousness” (John White).

KEN WILBER is the founder of Integral Institute and the cofounder of Integral Life. He is an internationally acknowledged leader and the preeminent scholar of the Integral stage of human development. He is the author of more than twenty books, including Integral Meditation, A Theory of Everything, Integral Spirituality, No Boundary,Grace and Grit, and Sex, Ecology, Spirituality.

"In this 20th-anniversary edition of the bestselling work, Wilber takes readers on a journey from the Big Bang to the future, impressively synthesizing multiple fields of study. He organizes his material to fit its evolutionary nature, feeding off of what came before in order to provide a transformational ‘unified theory’ of history. Readers will gain new perspective on what they know, or think they know, about every possible discipline.”—Publishers Weekly

"Ken Wilber is a national treasure. No one is working at the integration of Eastern and Western wisdom literature with such depth or breadth of mind and heart as he." —Robert Kegan, Professor of Education, Harvard University Graduate School of Education, and author of In Over Our Heads

"When Ken Wilber’s thought walks through your mind, the door to the next higher level becomes visible. Anyone seeking to update the wisdom traditions of their lineage needs his reality and consciousness maps. The kabbalah of the future will lean on Ken’s work." —Reb Zalman Schachter-Shalomi

"In the ambitiously titled A Brief History of Everything, Wilber continues his search for the primary patterns that manifest in all realms of existence. Like Hegel in the West and Aurobindo in the East, Wilber is a thinker in the grand systematic tradition, an intellectual adventurer concerned with nothing less than the whole course of evolution, life's ultimate trajectory—in a word, everything. . . . Combining spiritual sensitivity with enormous intellectual understanding and a style of elegance and clarity, A Brief History of Everything is a clarion call for seeing the world as a whole, much at odds with the depressing reductionism of trendy Foucault-derivative academic philosophy. "—San Francisco Chronicle