What You Should Know About Politics . . . But Don't: A Non-Partisan Guide to the Issues That Matter (Paperback) 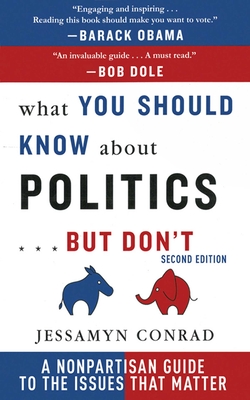 By Jessamyn Conrad
$16.95
Email or call for price.

Now in its second edition, here is one of the first and only issue-based nonpartisan guides to contemporary American politics. It’s a very exciting time in American politics. Voter turnout in primaries and caucuses across the nation has shattered old records. More than ever, in this election year people are paying attention to the issues. But in a world of sound bites and deliberate misinformation and a political scene that is literally colored by a partisan divide—blue vs. red—how does the average educated American find a reliable source that’s free of political spin?
What You Should Know About Politics . . . But Don’t breaks it all down, issue by issue, explaining who stands for what, and why, whether it’s the economy, the war in Iraq, health care, oil and renewable energy sources, or climate change. If you’re a Democrat, a Republican, or somewhere in between, it’s the perfect book to brush up on a single topic or read through to get a deeper understanding of the often mucky world of American politics.

Jessamyn Conrad was raised in North Dakota and Minnesota. With degrees from Harvard and Cambridge Universities, she is currently pursuing a doctorate at Columbia University. She lives in New York City.

Dr. Naomi Wolf, a graduate of Yale University, a Rhodes Scholar at Oxford, and recipient of a D Phil from Oxford University in Victorian Studies, was a consultant to Al Gore during his presidential campaign, on women’s issues and social policy. A professor, journalist, social critic, and political activist, she is the co-founder of the Woodhull Institute for Ethical Leadership, the American Freedom campaign, and the civic technology startup, DailyClout.com. She is the author of the international bestsellers The Beauty Myth and The End of America, as well as six other bestsellers. Her work has appeared in The Times of London, Huffington Post, The Guardian, The Washington Post, and Harper’s Bazaar. She has appeared on Larry King Live, Meet the Press, The Joyce Behar Show, and The Colbert Report. She resides in New York City.