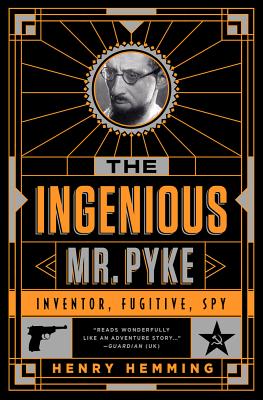 The untold story of an enigmatic genius who changed warfare forever

In the World War II era, Geoffrey Pyke was described as one of the world's great minds -- to rank alongside Einstein. Pyke was an inventor, adventurer, polymath, and unlikely hero of both world wars. He earned a fortune on the stock market, founded an influential pre-school, wrote a bestseller, and came up with the idea for the US and Canadian Special Forces. In 1942, he convinced Winston Churchill to build an aircraft carrier out of reinforced ice.

Pyke escaped from a German WWI prison camp, devised an ingenious plan to help the Republicans in the Spanish Civil War, and launched a private attempt to avert the outbreak of the Second World War by sending into Nazi Germany a group of pollsters disguised as golfers.

And he may have been a Russian spy.

In 2009, long after Pyke's death, MI5 released a mass of material suggesting that Pyke was in fact a senior official in the Soviet Comintern. In 1951, papers relating to Pyke were found in the flat of "Cambridge Spy" Guy Burgess after his defection to Moscow. MI5 had "watchers" follow Pyke through the bombed-out streets of London, his letters were opened, and listening devices picked up clues to his real identity. Convinced he was a Soviet agent codenamed Professor P, MI5 helped to bring his career to an end.

Henry Hemming is the first reporter to sift through this extraordinary new information and finally tell Pyke's astonishing story in full: his brilliance, his flaws, and his life of adventures, ideas, and secrets.

Henry Hemming is the author of five works of nonfiction including Agent M and The Ingenious Mr Pyke, which landed on the New York Times monthly espionage bestseller list. He has written for the Sunday Times, Daily Telegraph, Daily Mail, the Times, the Economist, FT Magazine, and the Washington Post, and has given interviews on Radio 4's Today Programme and NBC's Today Show and spoken at schools, festivals and companies including RDF Media, The RSA, Science Museum, Frontline Club, and The School of Life. Henry lives in London with his wife, daughter and son.

“It is as if [Geoffrey Pyke] had been invented by G. K. Chesterton and given posthumous fame by John le Carré - which underlines the extraordinary accomplishment of his actual biographer Henry Hemming.”—Sir Michael Holroyd

“Reads wonderfully like an adventure story…Hemming…turn[s] the story of a nerdish chameleon into a page-turner.”—Guardian

“[Pyke's] was not a lucky life but, in his biographer, he has gained a little bit of posthumous luck. This admirable and thoroughly enjoyable book should rescue a weirdly original and innovative talent from oblivion.”—The Sunday Times (London)

“[A] masterful biography…Hemming's superlative text is nearly as nimble as Pyke's mind, and he reveals who this remarkable innovator really was.”—Publishers Weekly, STARRED REVIEW

“An unlikely tale of true espionage… Fans of Graham Greene and Alan Furst will revel in this well-told true-life story.”—Kirkus Reviews