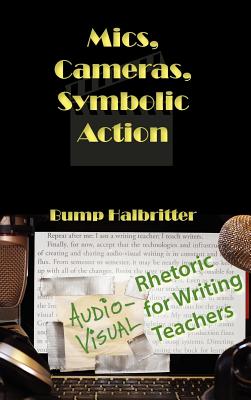 NEW MEDIA THEORY SERIES EDITOR: BYRON HAWK MICS, CAMERAS, SYMBOLIC ACTION: AUDIO-VISUAL RHETORIC FOR WRITING TEACHERS addresses the current technological challenges and opportunities of writing teachers through a conceptualization of writing and reading that could not have been imagined by many writing teachers at the turn of the twenty-first century. While MICS, CAMERAS, SYMBOLIC ACTION looks forward to emerging writing technologies, it finds its theoretical foundations by looking back to Kenneth Burke's concept of symbolic action. MICS, CAMERAS, SYMBOLIC ACTION situates its pedagogy for engaging the multidimensional rhetoric of audio-visual writing to help new and experienced writing teachers select, create, and engage productive models for designing audio-visual writing assignments and curricula. MICS, CAMERAS, SYMBOLIC ACTION draws upon Erika Lindemann and her pioneering work in A Rhetoric for Writing Teachers, as well as the educational theory of John Dewey, the multiliteracy theory of Stuart Selber, and the design philosophy of Robin Williams. Rather than look to the creation and critique of audio-visual texts as the goal of its pedagogy, MICS, CAMERAS, SYMBOLIC ACTION looks for ways to use the creation and critique of audio-visual texts as a means for realizing a variety of learning goals for writing students. Bump HALBRITTER establishes not only the theoretical foundation for that work but also discusses, in depth, the material demands of working with audio-visual assets that writing teachers have not typically been trained to use: microphones, video cameras, and an array of other peripheral technologies for collecting, storing, and exchanging audio-visual information. BUMP HALBRITTER is Associate Professor of Rhetoric and Writing at Michigan State University and is Editor of CCC ONLINE. His work on aural rhetoric and audio-visual writing pedagogy has appeared in KAIROS, ENCULTURATION, COMPUTERS AND COMPOSITION, COLLEGE ENGLISH, and in the edited collection, DIGITAL TOOLS. Halbritter and Julie Lindquist are co-PIs of the long-term research project LiteracyCorps Michigan, a multi-phase research project that uses digital video to investigate and document the literate lives of college students. "The voice and style are one of the Mics, Cameras, Symbolic Action's great strengths, as they render the subject approachable and readable to those who might not yet consider themselves a part of rhetoric and composition culture. Halbritter makes a compelling argument for why we should become engaged in the (symbolic) action of multimedia composing." - ERIN KARPER.