History of the Cherokee Indians and Their Legends and Folk Lore. with a New Added Index (Hardcover) 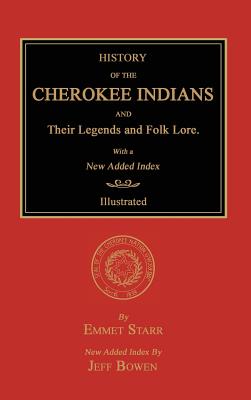 By Emmet Starr, Jeff Bowen (Index by)
$73.45
Available at Warehouse

This reprinted edition contains a New, comprehensive, every-name Index, consisting of 123 pages, which was not included in the original publication.

The History of the Cherokee Indians and Their Legends and Folk Lore, is considered an essential source of reference for researchers investigating the Cherokee tribe, or family historians tracing their Native American family genealogy. In his Preface, the author Dr. Emmet Starr writes, "This humble effort is attempted for the purpose of perpetuating some of the facts relative to the Cherokee tribe that might otherwise be lost. The object has been to make it as near a personal history and biography of as many Cherokees as possible." Dr. Starr easily accomplishes his stated purpose and objective in this well-written and comprehensive book.

The second-half of this work is devoted to genealogies and biographies, of which there are several hundred, providing information on marriages, births, deaths over several generations and naming thousands of related persons. A new, every-name index has been added, containing more than 15,000 names.