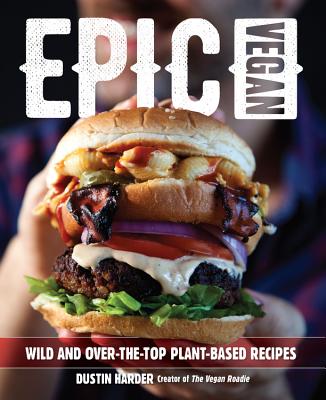 By Dustin Harder
$26.99
Available at Warehouse

Dustin Harder is the host and creator of the original series, The Vegan Roadie. A graduate of the Natural Gourmet Institute in New York City, he is a vegan chef, cooking instructor and works in culinary development for restaurants and various food brands. Dustin has been seen on The Food Network and appeared in various publications such as Eating Well, VegNews, Vegan Lifestyle Magazine, Chowhound, Vegetarian Times, and Paste magazine. He is the author of The Simply Vegan Cookbook featured by Forbes as one of the “Best Vegan Cookbooks,” Epic Vegan named one of the "Best Vegan Books of 2019" by Eat This, Not That, and Epic Vegan Quick and Easy. Learn more about Dustin Harder at veganroadie.com and on Facebook, Instagram, and Twitter (@TheVeganRoadie).

“Dustin has taken his vegan creations to a whole other level! Every recipe in Epic Vegan starts off as a true classic, but then he puts his magical twist on it to make it unique, scrumptious, and, most importantly, very easy to make. I’ve been lucky enough to taste-test all of these recipes and, let me tell you, they are amazing! What’s not to drool over in his Almost Famous Buffalo Chicken Lasagna and Pumpkin Cream Cheese Latte Shake? His Double-Stacked Cookie Dough Cake had me begging for more!”
- Chloe Coscarelli, vegan chef and author of Chloe Flavor—-

“Epic Vegan is a kick-ass cookbook, breaking the stereotype that vegan food is bland, limited, and boring. A great addition to that must-have cookbook list!”
- Chad Sarno, chef, author, and co-founder of Wicked Healthy and VP Culinary Good Catch Foods—-

“Everyone is going to be able to cook, create, and bake everything they have been craving, sans animal products. And, they’ll be healthier, happier, full, and satisfied without any excuses.”
- Doron Petersan, Food Network Cupcake Wars champion, author of Sticky Fingers' Vegan Sweets, and owne—-

“If you have ever had an inkling or craving for some serious stunt food as a vegan, Dustin has you more than covered with Epic Vegan. Combinations that only a mad food scientist could come up with are executed beautifully for dishes that are guaranteed to make you salivate.”
- Jackie Sobon, author of Vegan Yack Attack On the Go! and Vegan Bowl Attack!—-

“Pure vegan joy! From succulent seitan to lobster rolls in a biscuit, this treasure trove of recipes shall turn your normal dinner rotation into a vegan road trip for the ages.”
- Kale Walch, The Herbivorous Butcher—-

"Plant-based cuisine that is inventive, flavorful, fun and above all else, accessible to the masses. You will fall in love with Dustin's approachable recipes that flourish with familiar ingredients we all know and love. Not just for vegans, everyone will enjoy this over-the-top spin on comfort classics paired with beautiful images, personal anecdotes, and an entertaining, can-do approach!”
- Miyoko Schinner, author, television host, founder and CEO of Miyoko's Kitchen—-