Know It All Whiskey: The 50 Most Elemental Concepts of Whiskey, Each Explained in Under a Minute (Paperback) 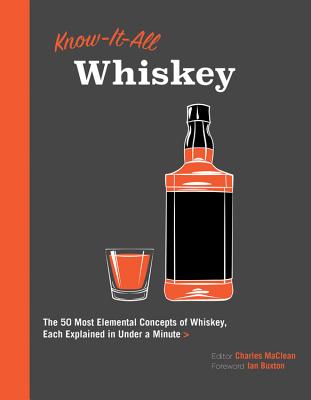 By Charles MacLean, Ian Buxton (Foreword by)
Email or call for price
Hard to Find

Knowing whiskey is social capital these days. Know It All Whiskey is here to make sure you know your Scottish single malts from your Kentuckys.

So you enjoy a dram or two, but do you know how whiskey is made? Do you understand how to nose and taste whiskey, and can you tell the difference between regional and national varieties? Pour yourself a measure, take a seat, and let Know It All Whiskey take you on a journey from the very first distillers to the latest brands around the world.

Know-It-All Whiskey demystifies the origins, history, production, and varieties of one of the world’s favorite spirits. Compiled by whiskey experts, this beginner’s guide serves up all you need to read the message in the bottle in 50 small nips—or rather, with 300 words and an image.

Entries explain everything from the history of whiskey production, including the ins and outs of the whiskey trade, to which foods to pair and which whiskey festivals to visit. Distilled with spirited graphics and supported by glossaries and biographies of key figures, here’s how to enjoy whiskey—or whisky—from the single malts and blends of Scotland to their acclaimed Irish, North American, and Asian counterparts.

Charles MacLean has been described by The Times as “Scotland’s leading whisky expert.” He has been researching and writing about whisky for 35 years, and has published 15 books on the subject, including Malt Whisky, which won a Glenfiddich Award, and Whisky: A Liquid History, which won "Wine & Spirits Book of the Year" in the James Beard Awards 2005 and "Best Drinks Book" in the International Food Media Awards 2005. He was founding editor of Whisky Magazine (1997), contributes regularly to many publications, and has written historical and promotional materials for all the leading Scotch whisky companies. He is a member of the Judging Panel (Spirits) of the International Wines & Spirits Competition, was runner-up as "Communicator of the Year" in the 2003 IWSC Awards, and won "Outstanding Achievement of the Year in Scotch Whisky" in the 2012 Awards. He was elected a Keeper of the Quaich in 1992, and elevated to Master of the Quaich in 2009.

Ian Buxton is an author, commentator, and consultant with some 30 years’ experience in the drinks industry. He writes for a number of trade and consumer magazines and his books—including the bestselling 101 Whiskies to Try Before You Die—have been translated into eight different languages.