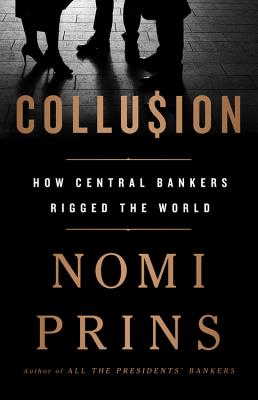 In this searing exposÃ©former Wall Street insider Nomi Prins shows how the 2007-2008 financial crisis turbo-boosted the influence of central bankers and triggered a massive shift in the world order.

Central banks and international institutions like the IMF have overstepped their traditional mandates by directing the flow of epic sums of fabricated money without any checks or balances. Meanwhile, the open door between private and central banking has ensured endless opportunities for market manipulation and asset bubbles -- with government support.

Through on-the-ground reporting, Prins reveals how five regions and their central banks reshaped economics and geopolitics. She discloses how Mexico navigated its relationship with the US while striving for independence and how Brazil led the BRICS countries to challenge the US dollar's hegemony. She explains how China's retaliation against the Fed's supremacy is aiding its ongoing ascent as a global superpower and how Japan is negotiating the power shift from the West to the East. And she illustrates how the European response to the financial crisis fueled instability that manifests itself in everything from rising populism to the shocking Brexit vote.

Packed with tantalizing details about the elite players orchestrating the world economy -- from Janet Yellen and Mario Draghi to Ben Bernanke and Christine Lagarde -- Collusion takes the reader inside the most discreet conversations at exclusive retreats like Jackson Hole and Davos. A work of meticulous reporting and bracing analysis, Collusion will change the way we understand the new world of international finance.

Nomi Prins is a journalist, speaker, respected TV and radio commentator, and former Wall Street executive. The author of six books, including All the Presidents' Bankers, Other People's Money, and It Takes a Pillage, her writing has been featured in the New York Times, Fortune, Mother Jones, Guardian, and Nation, among others. She was a member of Senator Bernie Sanders (D-VT) Federal Reserve Reform Advisory Council, and is on the advisory board of the whistle-blowing organization ExposeFacts.

"Prins is that rare combination of real-world expertise, scholarly method, and a brilliant writing style. Collusion is urgent and timely. A must-read for savers, students, journalists, and public officials."—James Rickards, bestselling author of Currency Wars and The Death of Money

"[An] unflinching,
troubling exposé... well worth a close read by anyone looking to understand the
roots of the last crash and prepare for the next."—Publishers Weekly

"After
the 2008 economic collapse, central banks created $21 trillion of money to
stave off a global depression. But who got all that new money? And how was it
used? The always insightful Nomi Prins, after traveling the globe for answers,
reveals the shocking truth-and she does it in plain English so everyone can
understand the awful facts."—David Cay Johnston, bestselling author of It's Even Worse Than You Think

"Prins
has emerged as one of the fiercest critics of crony capitalism and its
sustained attacks against poor and working people. This is the book that the financial
elites don't want you to read."—Jeremy Scahill, Academy Award-nominee, bestselling author of Blackwater, and cofounder of The Intercept

"Meet the Lords of Finance of the twenty-first century. Prins' in-depth reporting explores how central bankers' political aspirations came to supersede their duties to safeguard their economies. With few options, central bankers will become more desperate with hopes that more collusion will save the day. Read this book to understand how very wrong they are and to fully grasp the danger that lies in wait."—Danielle DiMartino Booth, author of Fed Up and former Federal Reserve advisor

"The
US doesn't have a financial press. It has something better-Nomi Prins. Read
this book to understand the central bank conspiracy against the world economy."—Paul Craig Roberts, former Wall Street Journal editor and assistant secretary of the US Treasury

"Central
banks, led by the Federal Reserve, are the opioids for private banks addicted
to being reckless with other people's money. Prins, drawing from her previous
work in Wall Street firms and her present field research around the world,
says, 'We are headed for another epic fall.' Taxpayers, workers and consumers
who will suffer from another bailout, all better read this clear, concise,
compelling book."—Ralph Nader

"Scarier than
Stephen King horror fiction. Prins, a refugee from Goldman Sachs, tells the
truth on her fellow banksters and their abuse of the scary uber-power they
wield when they take control of money-printing machinery of the world's central
banks. Astonishingly, she got deep inside these secretive power chambers-and
came out alive with truly fascinating tales of the blood diamonds of global
finance. I particularly enjoyed, if you can use that word, her exposure of the
cruelty and cupidity of the banking potentates who suffocated Greece to please
the gods of Markets and Mammon."—Greg Palast, author of The Best Democracy Money Can Buy

A somber, important
warning that's likely to cause readers to wonder about the safety of their
assets, if not fear for the near-term future.—Kirkus Reviews

"Captivating... an exposé of the highest order - an all-inclusive and wide-ranging attempt to draw back the curtain and illuminate those who are truly pulling the strings controlling the progression of world events... Prins leaves virtually no stone unturned in this comprehensive and mesmerizing indictment... Prins is able to write with an authority virtually nonexistent - or certainly unrivaled - among her peers."—Bowling Green Daily News